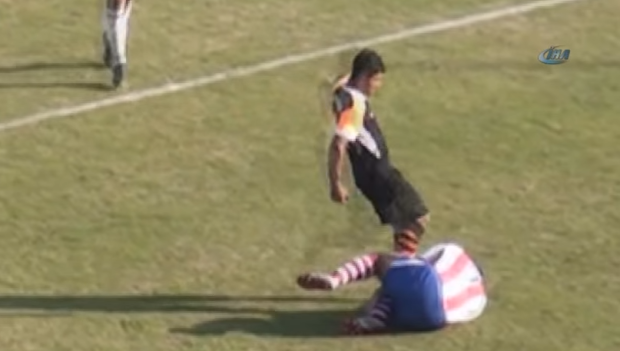 Mehmet Degirmenci who plays for Sanayispor over in Turkey was not only sent off the pitch by the referee, but also SACKED from his club after very deliberately kicking opponent Kayhan Karakas square in the face.

Karakas needed nine stitches in his lip following the attack, meanwhile his teammates were doing the whole “hold me back” routine because I don’t think anyone wanted a piece of Degirmenci after that — the guy clearly has a screw loose.

Karakas, who was actually able to finish the game, said

I continued playing for a while as I was playing in a team that we have established with great efforts. I did not want to leave my friends alone.

Thank God that kick came near my jaw. If it had hit me directly in the face, it could have broken my nose, made me blind or broken my neck.

Personally, I’d rather have seen him give these Premier League players a kicking.