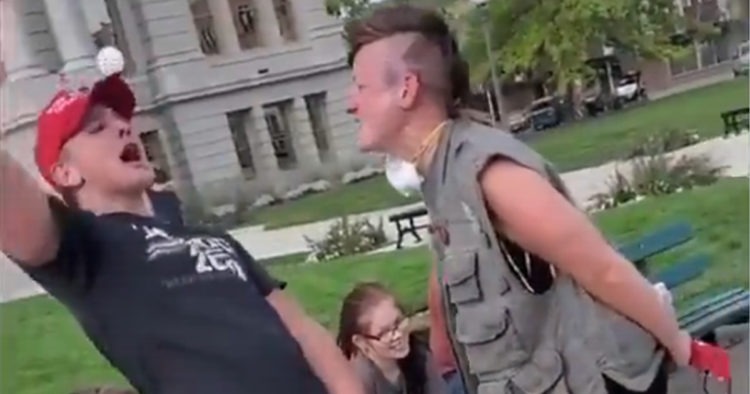 A natural subtext to the protests raging across America right now is the Presidential election race between Donald Trump and Joe Biden, pitting MAGA voters against those who want literally anyone except Donald Trump inside the White House come November 2020.

Representing the extreme ends of both sides, we have this young man in a MAGA hat and this young lady with the anarchist aesthetic coming face to face during the BLM protests. They ended up having a civilised debate where each side considered the other’s point of view and then hugged it out and went on with their days.

Just kidding, they both went nuts and started shouting and screaming at each other:

Unhinged. This is what Antifa members are like. pic.twitter.com/QUZfsMn8Ai

Who are you siding with? The guy yelling “Trump 2020” in the midst of violent crackdowns or the lady letting out blood-curdling screams like a banshee right in his face? Either way, it’s pretty much the perfect visual representation of how most political discussions play out these days. Imagine the offspring if these two somehow ended up mating!!

For more mental breakdowns, meet the girl who literally had a meltdown after a fellow motorist gave her the middle finger. Would these people even survive a day in the UK?