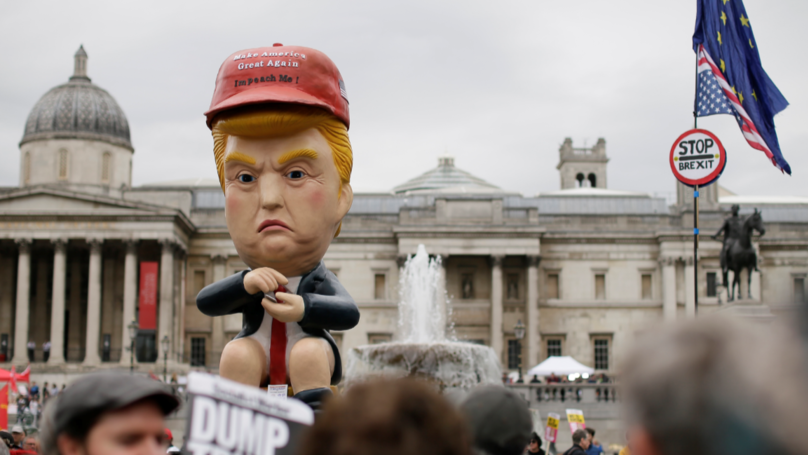 Where did this come from?

Don’t you just love it when mysterious statues appear out of nowhere in the strangest places, taking aim at popular culture?

The latest of these has appeared today in central London in Trafalgar Square, where a 16 foot talking robot of Donald Trump sitting on a golden toilet has suddenly emerged to coincide with the President’s current visit. The robot spouts out some of Trump’s most famous phrases including ‘you are fake news’, ‘no collusion’ and I’m a very stable genius’ whilst also farting from time to time as well.

It was brought over from the States by a guy from Philadelphia named Don Lessen, who said the following about it:

The fart we couldn’t get from him [Trump] so we had to use a generic fart.

Well he’s a disgrace. I want people to realise that this doesn’t represent America. Humour is my weapon. He’s a would-be dictator.

We got the robot made in China to spite him even more.

I mean yeah that is pretty funny, but I gotta ask what this Don guy is doing with his life if he can just afford to get this giant robot made and fly it over to the UK whenever he wants. Like it’s all fun and games sure but isn’t that gonna set him back a bit in time and effort as well as money too? And is it really going to achieve anything other than a bit of a lol? People are weird.

For more of the same, here’s Donald Trump falling asleep during the Queen’s speech. Epic.