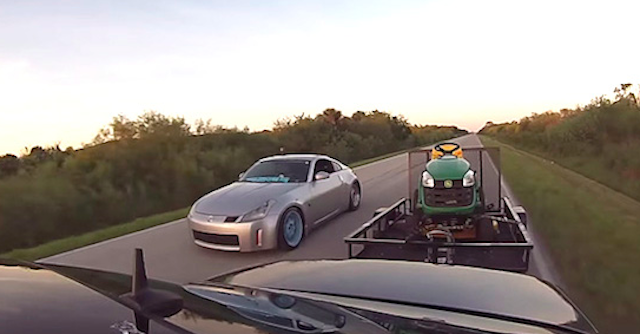 Everyone loves it when someone who talks a good game gets taught a lesson, and that’s exactly what happens in this video here.

Nobody likes a bragger who won’t shut up about how good he/she is at something, so it’s awesome when that person gets their ass handed to them in the most satisfying way possible.

This is what’s going down in this video, where a guy who owns a Nissan 350z reckons that he can rinse a guy who owns a Mercedes E55 owner in a Fast And Furious style race. I don’t know much about cars to be fair, but just from the name alone I would assume that a Mercedes would be able to beat a Nissan in a race, and that’s exactly how the Mercedes owner feels too.

In fact, he’s so confident that he even weighs down his car by attaching a tow truck to it with a massive lawnmower on it and yeah, he still manages to completely rinse the tool who was driving the Nissan. In face he completely leaves him in the dust – it’s not even a competition.

The feel good video of the day – unless maybe you own a Nissan 350z and think it’s a really good car.

â˜› More Races: The Most Insane Street Race Ever