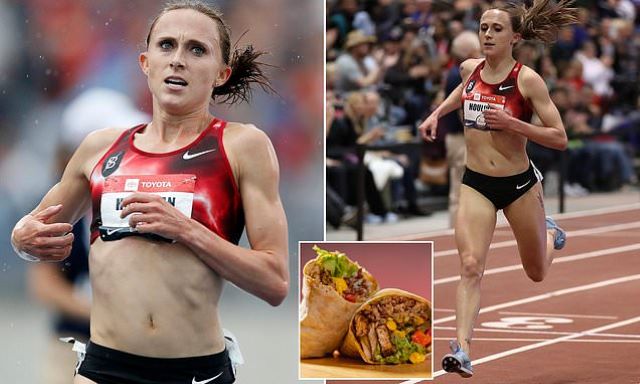 Most people out there have had at least one bad burrito experience in their lives, but that primarily involves puking your guts up and/or having insane diarrhea shits, not testing positive for a banned substance that results in you being suspended from from your sport/livelihood for 4 years.

Well that is apparently the case for Shelby Houlihan, the American record holder in the 1,500m and 5,000m,  after the 28-year-old received an email from the Athletics Integrity Unit (AIU) notifying her that a drug test sample found the anabolic steroid nandrolone in her system.

Shelby Houlihan, the U.S. record holder in the 1500m & 5000m, tested positive for the banned substance Nandrolone from a Dec. test & is banned for 4 years. No Olympic Trials. Says the positive test came from contaminated meat in a burrito. Appealed AIU’s decision to CAS & lost. pic.twitter.com/MZs7pskQNH

“I’m going to continue fighting to prove my innocence. I will not sit down and accept a four year ban for something that I did not and would never do.”

So Shelby is adamant that a tainted pork burrito is to blame, which isn’t completely out of the question but then you’d expect a (alleged) drugs cheat to make excuses, especially given a 28-year-old athlete can’t really afford to be suspended from high-level competition for 4 years, not to mention her livelihood being dependent on endorsements and appearances that rely on her competing. And especially ahead of the 2021 Olympic Games in Tokyo! Just a horrible time to be busted taking a banned substance (allegedly).

If this burrito story does end up exonerating her though (it won’t but let’s pretend there’s a chance), could blaming burritos become the #1 go-to excuse for all other things in future? Want a day off a work? Say you ate a contaminated pork burrito and now your tummy hurts. Missus ordering you to take out the bins? Say you ate a tainted burrito and cannot move. Miss an open goal sitter at Power League? Mate, that’s all the burrito’s fault.

Who knows, maybe we’ll even get a conspiracy theory out of this that a rival competitor, maybe from China or Russia, contaminated Shelby’s burrito to ensure she couldn’t take part in the Tokyo Olympics. A bit like the Tonya Harding story except the 2021 version. Can’t rule anything out these days.

To meet the mum who cooked up a chilli and beef burrito with her placenta after giving birth, click HERE. That’ll probably have you testing positive for something too.