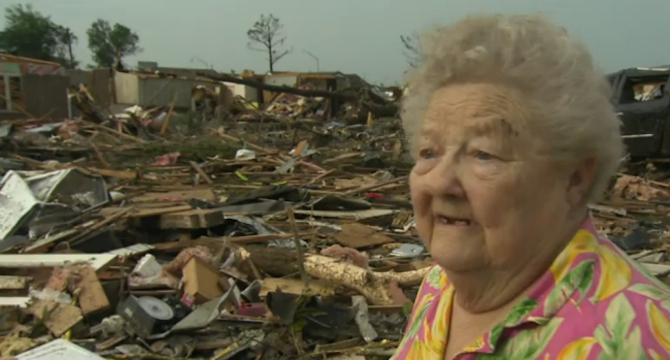 Even though this is the aftermath of a huge hurricane that destroyed parts of Oklahoma, things don’t really get more heartwarming than this.

Everyone has probably heard about the tornado that swept through Oklahoma yesterday and killed almost 100 people and injured thousands more and left a bunch more homeless, and I’m sure that everyone agrees that the tornado completely sucks and it blows that this has happened.

If you missed it earlier check out this video that we posted of the tornado in action – it’s some pretty scary stuff. I mean I thought Twister was a sick movie back in 1995 or whenever it came out, but there is no way that I would ever want to be anywhere near as close to a tornado as the guys in that video. No way.

Even though pretty much everything to do with the tornado has bummed everyone out, this awesome story has helped to slightly ease the pain and suffering that has been going over there and inspire a bunch of people over here because it really is one of the most heartwarming scenes you’ll ever see. Thanks to all the people that have sent it in to us today.

It plays out like the end of a movie where half of the audience would be in tears. I think I said that something else I wrote about on Sick Chirpse last week was the feel good story of the year but I think this has it beat hands down.

This old woman called Barbara Garcia was being interviewed in the rubble of her old house after it had been destroyed during the tornado – ‘I was sitting on the stool holding my dog. This was the game plan all through the years, to go in that little bathroom (together). I rolled around a little bit and when it stopped I was right there (and) that stove cooker is what I saw. I never lost consciousness and I hollered for my little dog and he didn’t answer, he didn’t come, so I know he’s in here somewhere.’

As she was giving the interview though, a member of the camera crew spotted a dog’s head poking out from underneath the rubble and the pair were emotionally reunited live on television. It ruled, and hopefully there will be a load more stories like this emerging over the next couple of days of people being reunited with their loved ones. I doubt that many of these reunions will take place on live television though unfortunately for us.

You can check out the video below:

â˜› Read Next: Malcolm In The Middle Reunion