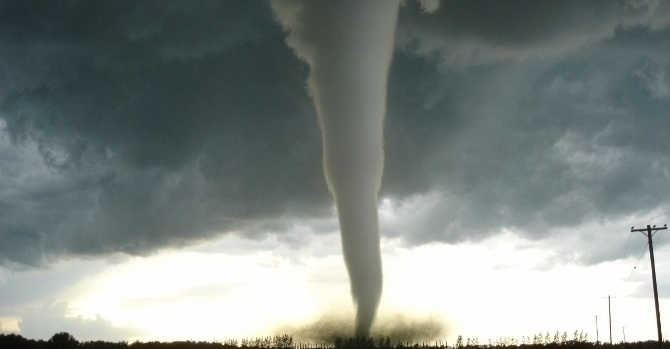 Tornadoes recently ripped through Oklahoma and these guys were fearless enough to get up close and personal. Intense stuff.

Tornadoes are oxymorons. They’re beautiful things, but are really ugly at the same time. Beautiful because, well, just look at ’em. They’re true testament to the cosmetic force of nature and are pretty mesmerising and fascinating to watch – from your armchair, anyway. The way they just blurt out of the sky, crash, spiral and pirouette down to the ground and dance arm-in-arm with the clouds really is something you’ve gotta see at least once in your life – even if it’s an internet video. But they’re pretty ugly things as well, you know, with the amount of sheer destruction and hysteria they cause. People die because of tornadoes, houses are lost, cars destroyed, animals killed, money wasted.

â˜› Check Out This Tornado: Bring Forth The Fire Tornado

The closest I’ve ever come to a tornado is watching Twister on the old VHS, or my arse after a session on the Guinness on Friday night. To be honest, I wouldn’t really wanna come close to an actual tornado in real life because I don’t enjoy having cars and sheep and houses thrown at me but watching them from the comfort of your own hot rock ridden bedsheets clears the hangover right off and makes for pretty intriguing viewing.

Carney, in Oklahoma, USA, recently had the bad luck of a tornado ripping through the place, and two fearless gladiators caught it all on film for us. The footage is immense and it’s hard to take your eyes away from the screen in case you miss something, especially after the 6-minute mark. These guys must be, like, the non-fiction equivalent of the Twister characters and I know, for one, I wouldn’t wanna venture as close to the tornado as they did. Kudos to their huge balls.

â˜› More Huge Balls: Headcam Footage Of Skier Ripping It On Slopes Before Getting Busted By The Cops

This tornado was part of several that cut through Oklahoma on the weekend and they caused significant damage to the southeast side in places like Carney. This included knocking trucks off the highway, damaging cars and homes, and destroying part of a mobile home park. While writing this post 91 people have died so far. Sick Chirpse sends our best wishes to our fellow chirpsers over there, in Oklahoma.