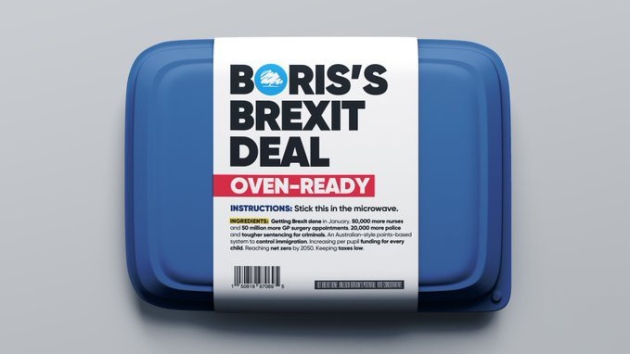 The biggest General Election of our lifetime (TM) is coming next Thursday and the teams behind each political party are turning up their campaigns to maximum in an effort to persuade the population to give them their precious votes and once again they’re scoring some spectacular own goals with some of their strategies.

A huge example – possibly the best I’ve ever seen – is this ‘Oven Ready Brexit Box’ which was tweeted from their official account:

I mean lol where to begin with this one. First of all, Boris Johnson already vowed that Brexit would be done by October 31st or he would be dead in a ditch and that didn’t happen, so why would anyone believe that this ‘oven ready Brexit’ is actually what they’re saying it is? Secondly, why would anyone compare the Brexit process to an oven meal – they’re notoriously cheap and crappy, never fill you up like they’re supposed to and never ever look anything like what you see on the packaging?

Talk about a terrible analogy for what they’re trying to achieve and absolutely terrible marketing there hey? Here are some of the other best comments about it floating around on Twitter:

When you open the box, there’s a shit in it.

It’s funny because this doesn’t look like a ready meal at all, and the reason it doesn’t is because ready meals have TRANSPARENT lids so you can SEE WHAT’S ACTUALLY IN THERE AND MAKE SURE YOU WANT IT BEFORE YOU PAY FOR IT

You know what happens when you pop a microwave meal in the oven?

You get a disaster.

I mean that’s just the tip of the iceberg because there are literally hundreds of them rinsing the Tories for this stupid meme and rightly so to be honest. Absolutely terrible analogy. They’ll probably still win the election though.