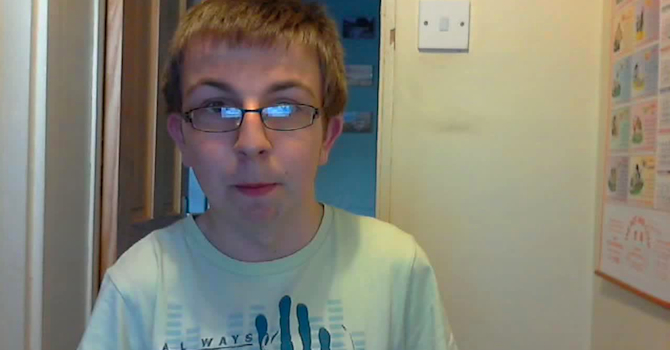 OK so this has been around for a while, and it seems like the kid has a bunch of subscribers on his YouTube channel so if you’ve seen it before I apologise, but a bunch of people on my Facebook feed started sharing it last week so I figured there must be a bunch of people who had never heard of this guy before so it was probably worth sticking him up on Sick Chirpse.

Cool, now that that is out of the way here’s what this video is all about. Basically this guy is one of the many, many people who think that if they upload videos of themselves talking about stuff onto YouTube that they’ll instantly become famous within the YouTube community (which to them might as well mean the entire world) and become an internet celebrity and make a lot of money from it. Most of the people that do this usually fail horribly and make videos that end up getting about 45 views over a 6 month period, but this kid was actually really funny and kinda killed it on YouTube. To a certain extent.

The thing is I don’t think this kid IS actually that funny he’s just a complete geek and everyone who watches the videos are probably just laughing at him because of his geeky looks and unbelievably nasal voice. And the fact that he thinks he can give his top 10 chat up lines – which are all awful – with a straight face when it’s quite clear that he’s a 13 year old boy who has never got laid (or probably even kissed a girl or even spoken to one) is just perfect and utterly hilarious.

I mean who even uses chat up lines anyway? I don’t think I’ve ever used one, at least not seriously. Do girls even like them? I guess this is why it’s a 13 year old kid doing this and not a 25 year old guy with some experience.

â˜› More Chat Up Lines: Dude Tries To Pick Up Chicks With Nothing But Blink 182 Lyrics