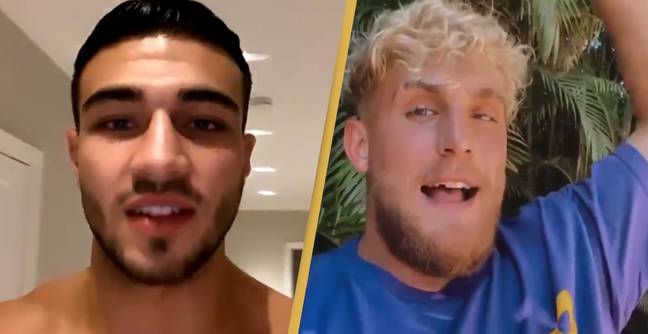 The boxing world was joking around a bit on Saturday after Tommy Fury made light work of a guy who was 0-9 in his professional career, but it now turns out that a tweet from his brother Tyson may have ignited a feud with YouTuber turned boxer Jake Paul himself.

Tyson was tweeting his support of Tommy alongside some ratings for the boxing matches taking place over the weekend which firmly put Fury out in front of even Saul Canelo – although I think it was eventually established that these figures were actually faked – and calling out Jake Paul in the comments.

The fuse was lit and it didn’t take long for Jake Paul to clap back with the following post on his Instagram stories:

Then I wake up and see Tyson Fury, the heavyweight champ, tweets me and he was talking s*t about Canelo too, saying it was boring or like no one was watching and I was laughing along with it.

Then I get to the bottom of the tweet and I see that he calls me out to fight someone and the tweet’s about his brother, and I’m like, “I didn’t even know he had a bro.”

But my point is here, you’re Tyson Fury’s little brother, if you want to fight me, don’t let your big bro do sh*t for you, log on to Instagram and Twitter and call me out for yourself, bro. What’s going on in this boxing world.

Well, be careful what you wish for because this is exactly what Tommy Fury proceeded to do:

So, I see somebody is having a little bit of something to say.

Mr Jake Paul, I don’t need anybody to do my dirty work, I’m calling you out myself right now.

You can fight me any time, any place, anywhere. All you’ve got to do is get in touch.

Well, there you have it. Will this fight happen and will it be interesting to anyone who isn’t obsessed with YouTubers/reality television? Seems like it would make a lot of money and get a lot of buys – and you would definitely tune into the highlights, just admit it – but Jake Paul has to get past Ben Askren first later this month and then he’ll probably try and fight Conor McGregor again if he’s successful in that endeavour. This fight has a good chance of happening if he loses though or down the line somewhere, mark my words.

For more of the same, check out Floyd Mayweather going on a race tirade after Jake Paul made fun of him for not being able to read. Kinda fair enough really.