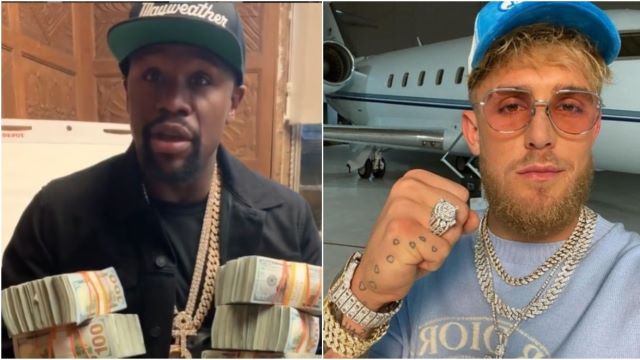 He accuses Jake Paul of wanting to be black.

Floyd Mayweather is due to fight Logan Paul in a boxing match later this year, but this week he’s gotten into it with Logan’s brother Jake Paul, after the YouTuber mocked him for not being able to read.

Here’s the video that got under Floyd’s skin:

Well this sent Floyd Mayweather on an Instagram tangent, in which he accused Jake Paul of trying to ‘be black’, and then said he would fight him after he’s done dispatching his brother Logan.

SWIPE LEFT ⬅️ Jake Paul is talking about he don’t do exhibitions, them two bullshit boxing matches he had were exhibitions. They were not against real professional boxers. And I don’t even play when it comes to education because millions of blacks got lynched just for reading. Let me see, you went to get a black boxing trainer, try to dress like you’re black, wear jewelry like black people, try to dance like black people, but you don’t want to be BLACK. All you do is jack black swag from us. You go from groupie fan to a fake professional fighter, this world is crazy.

I don’t really know what to say about the racial aspect of that post, but it’s all pretty amusing from an entertainment standpoint. And to be fair Floyd (and Jake) both know what they’re doing – hyping up a potential fight just in time for Floyd’s fight with Logan later this year, which will set up a fight between Floyd and Jake IF Jake can get past Ben Askren.

To top it all off, Floyd then challenged 50 Cent to a fight too. Huh?

I also heard that 50 Cent would fight me but claims I’m too small. If he wants to lace up at the end of the year, we can do an exhibition then.

I don’t care about weight class with any of these guys. The Paul brothers will make great money with the events, but with 50 Cent It has to be ‘Winner Take All.’

As Floyd references, 50 had given an interview that morning on an Atlanta radio station in which he said Floyd is too small to fight him. Which I think even 50 knows is a ridiculous thing to say. Remember, this feud between Floyd and 50 started way back in 2014, when 50 also made fun of him for not knowing how to read:

Personally, I hope Floyd Mayweather beats the piss out of all 3 of these guys. As it stands now though, only the Logan Paul fight is booked to happen (it was meant to happen in February, but has been postponed till later this year – bummer). Someone needs to crack down on this YouTuber/rapper-turned-boxer trend and I think Floyd’s the man to do it.