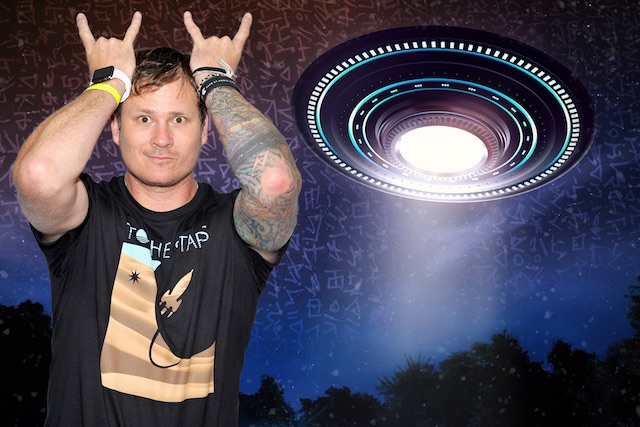 I think only if you even have a passing interest in Blink 182 or rock music in general then you will have heard about how former lead singer Tom DeLonge had to quit the band because he was so obsessed with aliens and well, here’s another story that proves it yet again.

It was announced towards the end of last year that DeLonge would be directing a movie called ‘Monsters Of California’, which has been described as a ‘coming of age drama with a science fiction twist following teenager Dallas Edwards and his derelict friends on a quest for the meaning behind a series of mysterious, paranormal events in Southern California’ and I wouldn’t say I was excited about it, but interested to see the finished results, sure. Anyway, veteran actor Richard Kind was cast to appear in the movie and showed up on Seth Myers to talk about it last night, where he revealed that Tom DeLonge talked about aliens so much during the shoot that it actually affected their productivity and ability to get things done:

I gotta tell you: The guy who directed it, his name is […] Tom DeLonge.

He loves aliens, he loves UFOs, has met with the Pentagon, and the whole time we’re shooting… and he’s a lovely guy, good director, everything like that… he was a great skateboarder and he’s a rock and roller who’s a director now, OK?

So I’m memorizing lines […] I’m in the scene and everything and he goes, “No no no, dude! Dude! You gotta listen to this story! There was one time this alien…’

It was fun, it was hilarious.

That kind of sounds like it might be funny if it happened once or twice, but if it was constantly happening and I was telling the guy that I had to learn my lines and he wouldn’t shut up about aliens, I think I would get kinda annoyed. Can imagine everyone at the wrap party desperately avoiding DeLonge as they didn’t want to hear another one of his crappy alien stories. I think Travis said that was one of the reasons why they had to kick him out Blink 182. Maybe his movie will at least be good.

For more of the same, check out when Tom DeLonge filmed one of the freakiest UFO videos that you’ll ever see. This was only last year.