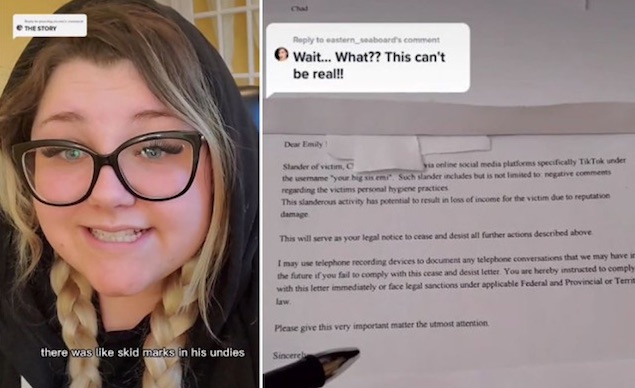 This guy sounds like a real piece of work.

Emily McKinnnon decided to share the story in a series of videos on her TikTok where she recounted the story of what can only be ‘the worst date ever’. Firstly, when she was about to have sex with the guy and he took his pants off, she realised that he had pretty much shit himself or just didn’t wash period, so she got the hell out of his apartment. Following on from that though, the guy repeatedly tried to sue her – first for ‘breach of contract’ as he assumed they were going to bonk and then later for defamation after she talked about him on her podcast.

What an absolute narc:

Wow. She talks fast doesn’t she? I guess there’s a lot to get in.

Can’t actually believe how insane this guy sounds though. The personal hygiene thing is strange enough – especially for a lawyer as you always expect them to be kind of clean and smart – but then when you factor in the fact that he still watches everything she does and tried to sue her for defamation less than 12 hours after she put up the post about him, then he really does scream next level psychopath. She should probably just tell everyone who he is so some other woman doesn’t get really screwed over by him.

For more of the same, check out this study that suggests if you say any of these five things then you might actually be a psychopath. Uh oh.