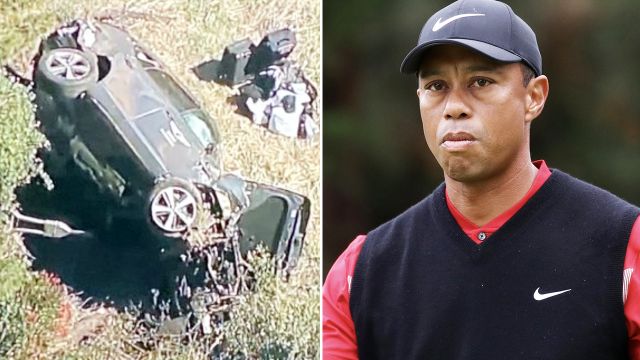 We were all saddened to hear about Tiger Woods being involved in a single car motor accident last night and being rushed to hospital for multiple surgeries on his leg, but the good news is that he’s come out the other side of surgery and is responsive and seems to be doing OK.

Obviously a number of people are going to accuse Tiger of being somewhat impaired during his accident given his previous battles with drug addiction, but police are reporting that there’s actually no evidence for that at all. Instead, it seems as though Tiger was driving somewhat erratically and impatiently because he was late for a film shoot with NFL QBs Drew Brees and Justin Herbert at a nearby golf course.

TMZ is reporting that his SUV was blocked in at the hotel he was staying at and that he almost ended up hitting the car of the director of ‘Grown-Ish’ – a TV sitcom that was also shooting in the hotel – when he was finally free because he was in such a rush. Here’s what they had to say about the incident:

Tiger Woods was headed to play golf and a photoshoot with Drew Brees and Chargers QB Justin Herbert and was running late according to Brett Baier of Fox News pic.twitter.com/S2NjGd8QHX

A statement on Tiger Woods’ condition:

“He is currently awake, responsive and recovering in his hospital room.”

Oliver Konteh, a member of the crew working on the TV show “Grown-ish” recounted to us on video what the director said about Tiger nearly hitting his car just before 7 AM.

1:47 PM PT — TMZ has learned … Tiger was staying at a hotel where a major network television show was being shot. Production sources tell TMZ, when the director arrived just before 7 AM, Tiger was driving his SUV very fast as he was leaving the property and almost hit the director’s car. The director was shaken enough to tell production staff about it after he parked.

A crew member who saw Tiger as he got in his SUV at the hotel tells TMZ, once Tiger got in his vehicle, there was a delay in driving off — we’re told his SUV was block by another car that was loading luggage — and he appeared “agitated and impatient.” The crew member says once the delay was over, Tiger “took off fast.”

Seems like he was really in a rush and this coupled with the fact that he was speeding down a road that is known to give drivers trouble was why he ended up crashing his car. The sheriff has confirmed that there was no evidence of impairment and obviously this still isn’t good from Woods, but it’s better than everyone on Twitter etc is giving him credit for with their snarky comments about ‘not being surprised etc’.

I gotta make it clear that I’m not condoning speeding or dangerous driving here, just that it’s awful that everyone automatically thought the worst of him given his previous trouble. At least nobody was hurt except Tiger, so we’re wishing him a speedy recovery. It sounds like he’s already been punished enough with the multiple leg surgeries as he’ll probably never play golf again, so let’s just hope it doesn’t affect his quality of life too much in the future.

For more of the same, check out when Tiger freaked out the whole internet by posting this weird selfie. Strange times.