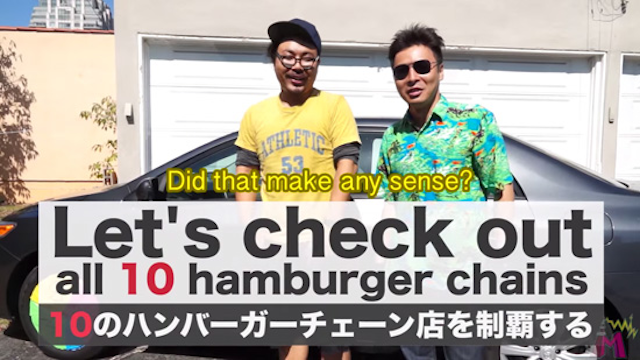 Some crazy Japanese guys thought it would be a great idea to drive around LA and eat a lot of burgers, and it was.

In principle, this is a pretty awesome idea but in reality it’s kinda lame because the three guys don’t all have to eat the ten burgers – they randomly decide how to determine it at each burger place via a roulette wheel that they’ve placed on the wheel of the car. Although it doesn’t exactly turn out to plan when you watch the videos through, but I’ll let you discover that for yourself.

Even with this (slightly lame) gimmick though, the video is actually really funny because they’re really crazy Japanese guys and they can’t talk to the burger people properly (or at least so that the burger people can understand them – this might be more the fault of the people working in the burger restaurant though) and order properly which generates a lot of laughs. It’s also useful seeing how they rate the various burger chains in L.A. (Jack In The Box, Carl’s Jr, In N Out etc)

It’s just a fun video series basically, especially if you like burgers and crazy Japanese people, which I’m sure most Sick Chirpse readers do.

â˜› More Burgers: The Ultimeatum – A 10,000 Calorie Burger Within A Burger