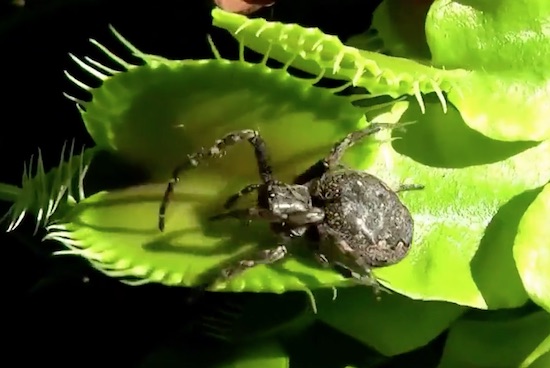 Everyone knows that Venus Fly Traps are absolutely deadly plants that trap and kill their prey in their huge jaws that no insect has ever managed to escape from, but I’m not sure if many of us actually realise how horrific this actually it to watch.

Don’t worry – after watching the video below you’ll understand. The video is a supercut of all kinds of gross insects crawling into Venus Fly Traps and then the jaws snapping shut over the top of them, effectively ending their lives. It’s also soundtracked by some David Lynch esque sinister music, which only serves to make the whole montage even more creepy and horrific:

So brutal. I thought that spider might be able to get out as its legs were still flapping around on the outside, but no such luck whatsoever. Once those jaws come down, it doesn’t look like there’s any way out.

I’m not gonna forget that in a hurry any time soon either after watching that video. The law of the jungle in full effect.

For more of the same, here’s an 80 year old crocodile catching and eating a shark. No mercy.