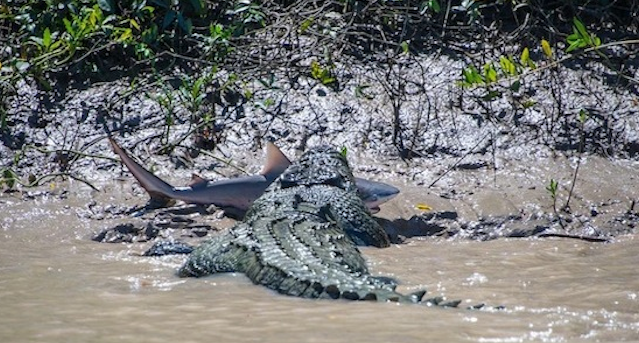 Welcome to the jungle baby. I’ve never really thought about who’s tougher out of a crocodile and a shark, but I probably would have thought that a shark would have taken it (especially after seeing this shark brutally attack a diver) , especially if the crocodile was an 80 year old old timer like this dude.

I would have been completely and utterly wrong though as these guys found out when they were on a jungle cruise down the Adelaide River over in Australia. Towards the end of the cruise they noticed a crocodile assaulting a shark and pretty much crushing its neck in its jaws so it could incapacitate it and then eat it.

Andrew Paice – a 43 year old dude who was on the cruise with his family and took these pictures – described the incident:

‘The shark was definitely alive… it was still wriggling. The crocodile slid back into the water and the shark started to flip around a bit. Then the crocodile swam into the mangroves, I guess to protect his catch.’

The crocodile is apparently called Brutus and is apparently 80 years old. It’s a legend on the tour because it has spectacular jumping ability, which is even more impressive due to the fact it doesn’t have a front leg. It lost it a while back in a fight with a shark, go figure. 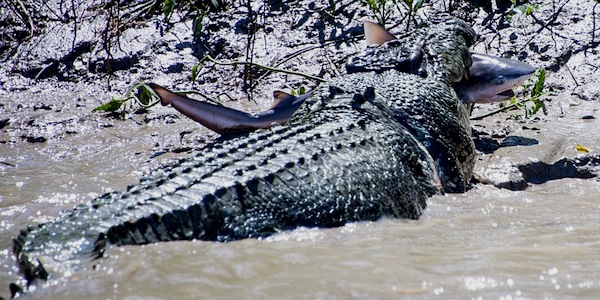