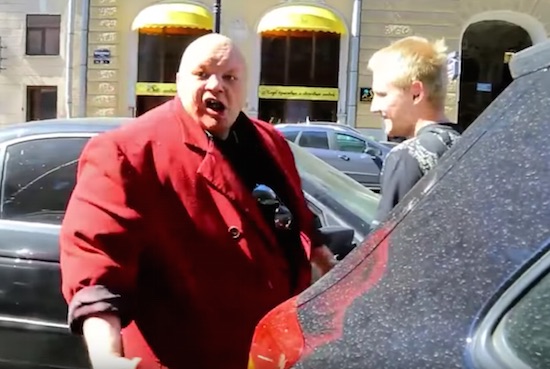 The kids were calling him out for being double parked.

Over in Russia, people are absolutely terrible at driving and have literally no respect for each other or the rules of the road.

To raise awareness about this, the ‘Stop A Douchebag’ campaign has targeted terrible drivers by putting massive stickers on their windscreens, which basically say they’re dickheads. Sometimes they get way more than they bargained for though, like in the video below.

I’m surprised they’ve even got the guts to approach this guy because he literally looks like the Kingpin from Marvel comics, but I doubt anyone could have ever predicted how he was going to react:

Wow. I mean I thought he was going to pull out a flamethrower from the boot of his car or something there, not just crack a couple of beers with his teeth. I’m not sure if he’s just having a joke or trying to be super intimidating either because he seems kind of jovial throughout?

Well, actually if you think about it for one second, it is fairly obvious he is just trying to be super intimidating because he’s the kind of guy that looks like he would be laughing in your face one second and then suddenly switch and smash you into shit. Of course he is, but you know when people do that everyone is secretly hoping they’re actually safe rather than a complete psychopath. Shame they never are though eh?

For more Russian gangsters, check out 30 gangsters raiding a restaurant but one guy just eating his dinner like it’s an everyday occurrence. Probably is over there.