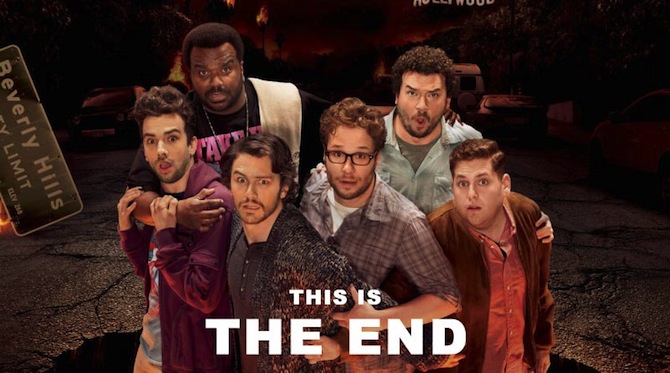 Check out our review of this weekend’s new release – stoner comedy ‘This Is The End’.

Jay Baruchel, Seth Rogan, James Franco, Jonah Hill, Craig Robinson and Danny McBride are all friends in real life. That’s essentially what was established after watching This Is The End; a self-gratifying concoction of ideas that, not too strangely, comes together well enough to give us a movie with plenty of laughs but not a lot of sense.

But can we really berate them for that? If Mr. Hollywood knocked on your door – presumably twirling a cane and wearing a smoking jacket –  and asked you to cast all your friends as themselves in a movie you write, would you decline? Nearly everyone would accept the proposal and march head-forth into a terrible film loved by nobody except the handful of pals that were in it. But the general self-deprecation of the leading players – as well as their natural talent as comedic actors – is just enough to make This Is The End worth your time.

â˜› Pineapple Express: Seth Rogen Shows You How To Roll A Cross Joint

Apart from being one of those guys that induces the classic ‘ahh, who is he? He’s in thingy?”, Jay Baruchel is also the central focus of the movie. He arrives in L.A. and immediately begins smoking copious amounts of weed with Seth Rogan, and once the drug use starts it does not stop. Ever. This movie could double up nicely as a propaganda tool for the legalisation of (or complete destruction, depending on how you look at it) weed, coke and ecstacy. Early on Franco hosts a party and a number of celebrities are crammed in to shot. I love the idea that Rihanna and Emma Watson – with all their success – are just dying to be people we all think we could have a beer with. But the truth is that the only thing more awkward than watching Micheal Cera snort multiple lines of cocaine is watching Rihanna try to tackle just one line of a song without technological assistance (and she might still have been using it). You have been warned.

Pretty soon the world descends into chaos and our six friends are left alone in Franco’s house with short supplies and a highly sought-after Milky Bar (product placement galore here. I’m pretty sure Facebook, Toyota and Mars stuck up most of the $32m budget). An oddball plot that flip-flops between out-and-out comedy, fantasy, action and disaster movie is kept relevant by strong performances: particularly Danny McBride, whose long-winded spiel about ejaculate – and what he can do with it – is truly a shining light in this film’s eclectic repertoire. I wish I could say the same for Jonah Hill, but even though we are treated to him at near-Superbad weight, he seems completely wasted as an overly nice darling of Hollywood with surprisingly little to say.

â˜› Not Friends: Real Life Barbie & Ken Hate Each Other

Overall this movie is intended as a tale of friendship between Rogan and Baruchel, but this relationship is more-or-less a back-story in aid of getting these six guys on-screen at the same time. What is clear is that this movie is not intended to entice you with its intricate plot and divisive characters; the trailer goes to virtually no lengths to make a case for that. Instead the hope is that watching these guys play themselves and send-up our notions of what celebrities get up to will do enough to part you from your hard-earned cash. And you know what? It is enough.