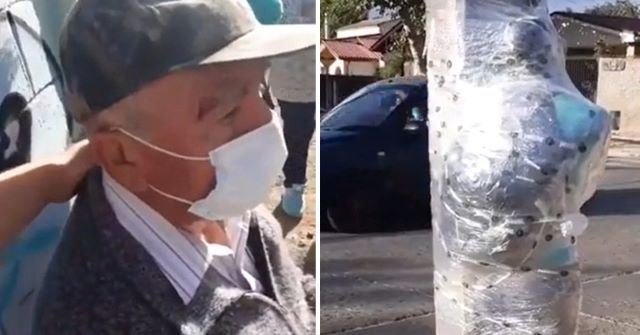 Now that’s what you call a citizen’s arrest.

In what might be the greatest bit of vigilante justice I’ve ever seen in all my years on the internet, a group of fed-up Chileans performed a citizen’s arrest on a thief by wrapping him up around a lamppost using cling-film.

Here’s how he ended up:

Apparently the thief was spotted robbing the old man who appears in the clip and a bunch of Good Samaritans teamed up to deal with the situation, which I guess is better than waiting for the police to show up. It might even be better than beating the guy to a bloody pulp, which we’ve seen many times in these sorts of clips out of south America, but doesn’t seem to deter criminals whatsoever. Maybe being cling-filmed into oblivion will?

Only thing they’ve got to worry about now is whether this crook re-emerges from his cling-film cocoon as some kind of supervillain hell-bent on revenge against all those who made a viral spectacle of him. He could end up doing a lot worse than robbing random old men in the middle of the street if that’s the case. Oh well, guess that’s Chile’s problem to deal with now.

For the man who caught a thief in his back garden and ended up chokeslamming him straight to hell, click HERE.