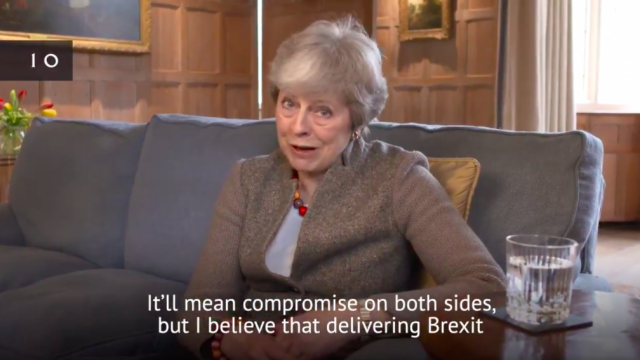 Thanks for clearing that up Theresa.

Brexit is becoming even more and more stupid as the days roll on, but it might just have reached its zenith with this video that for some reasons Theresa May thought would be a good idea to release via her Twitter account. Down with the kids hey?

Anyway, in this video, Theresa May attempts to explain what’s currently going on with Brexit because I guess nobody in this country talks or reads newspapers or can keep up with current events. the video involves her talking to the camera in a heavily scripted monologue that even includes breaks where she chuckles to appear more amenable to the public.

Having said all that though, it kinda comes across like something that might have appeared on Have I Got News For You or some other satirical show making fun of the government. It really is that poor. Take a look for yourself and see what you think:

Lol. Man I really don’t know who’s sitting at Downing Street saying ‘go on Theresa, this is a really good idea and it’ll definitely get the public on your side’ but man they should be fired immediately and someone with any semblance of a clue should be hired instead. I don’t think it’s even possible to make a better video to show how out of touch with reality the government actually is, so I suppose they should be applauded for that, even if it wasn’t their actual intention.

For more on Brexit, here’s a supporter saying it’ll be good for the country to go without food for a while. Nice one.