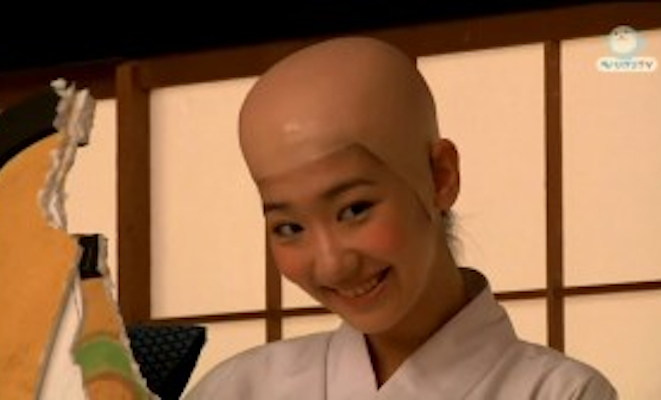 What does Minami Minegishi shaving her head really say about Japanese society? Pretty much that yeah, it’s definitely mental.

As many of you know, having likely read it on pretty much every major website in the world — including the famous Sick Chirpse, courtesy of Lazer Horse — Minami Minegshi of the Japanese pop sensation ‘AKB48’, shaved her head in an attempt to apologise for her ‘bad behaviour’. But why? Yes, Japan can be absolutely fucking mental, but is the fact that she had a boyfriend a justifiable reason for taking such extreme behaviour?

Us dirty westerners have generally said that actually, her response was perhaps just a teeny-tiny step too far. So what if she has a boyfriend, right? She’s a 20 year old woman, and she probably likes getting laid just as much as the rest of us. In fact, when I was 20, I was in my second year of uni, and spending far too much time smoking up and playing pro evo with my mates, rather than getting balls deep in the questionable student ‘talent’ that I was surrounded by. To this day, I regret allocating my funds towards keeping a steady supply of Reese’s chocolate cups, Dr Pepper, Doritos, cereal, and king skins, instead of getting on the whiskey cokes and chirpsing the girls who occasionally looked at me during lectures, and TOTALLY WANTED TO BONE, BRO.

To be fair, I had a girlfriend anyway, so whatever, and I’m also way off topic now. But my point is, we all like to get some, so why shouldn’t the 88 members of AKB be allowed to indulge themselves too? Basic human rights, right? Clean water, food, medical care, education, and getting to bang pretty much whenever you want. Well, in Japan, the general opinion hasn’t really followed what you would expect, with the large majority of people saying that she deserves to be punished, and has stepped way out of line in her role as an ‘idol’.

Why? She originally released a tearful apology video in which she begged for forgiveness and that she would do ‘anything to stay in the band’. This wasn’t released on her private youtube channel though, but instead on that of the band itself, which has since been made private at her fans’ request. Should a girl be this upset simply for having a boyfriend? I don’t think so. Every member of the band, as well as those in similarly shitty and annoying J-Pop get ups generally sign contracts stipulating ‘no dating’, so that they can present the idea to their largely middle-aged male fan base that they are both sexy and attainable, whilst also pure and reserved.

Their millions of fans vote constantly in online polls as to who is the best member, whilst product sales and web page hits also determine who is the most ‘liked’, and basically, who lines the pockets of the dickhead in charge most  generously. Put into context, the top members earn around ¥15-20 million (about £100,000) a year, whilst collectively, AKB48 generated total merchandise sales of ¥19.1 billion  (around £135million) in 2012 alone.