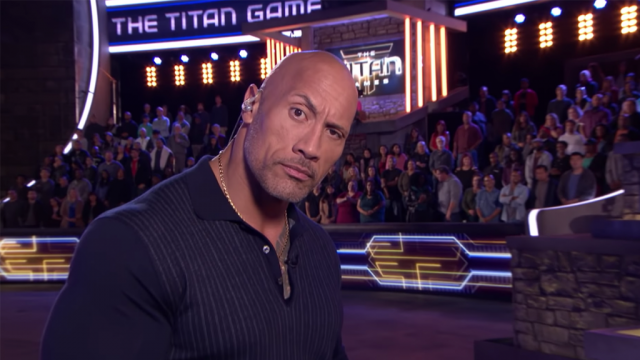 The Rock is undeniably one of the busiest men in the world, yet somehow he’s still managed to take the time out to develop and host a brand new gameshow that looks like it’s going to be completely insane.

It’s called ‘The Titan Games’ and revolves around contestants competing in monumental challenges which are all inspired by what The Rock says are ‘the workouts that fuel me, the struggles I’ve experienced, and the disciplines I believe in’. It already sounds like one of those classic American TV shows that really pulls on your heart strings before the guy/girl faces the challenge. Probably like how their dad died or they never achieved their dream of playing in the NFL because of an injury or something – you know what I’m talking about.

The best part of the show has to be Mount Olympus though. This is the final challenge which sees the contestants climb up Mount Olympus – taking part in seven challenges on the way – before descending it again into the arms of their loved ones. So, pretty much exactly the same as The Eliminator at the end of Gladiators then.

No shame in completely ripping it off but I suppose it hasn’t been on air for about 25 years so why not hey? Here’s the trailer:

I mean that does look epic right and I was totally right about the sob stories that would inevitably feature in the run up to it. Also I love the last line of ‘winning is just the beginning’ – the beginning of what exactly? Intrigued to find out what these people will go on to do once they’ve won The Titan Games because I’m pretty sure it isn’t going to be that much right there.

For more of The Rock, check out this story about how he lost his virginity. Will make you feel better about how you lost yours.