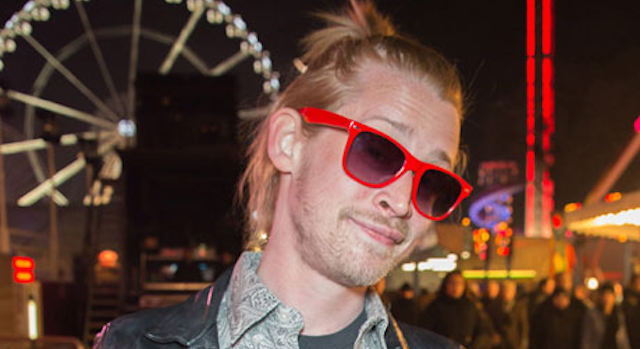 After years in the media wilderness, Macauley Culkin has returned as the frontman of a pizza themed Velvet Underground tribute band.

I never expected to be typing out a headline like that ever, but it’s true and it’s actually happened. After many years of living completely under the radar and only ever rarely being spotted by the media – and usually looking like a heroin addict when he was – Macauley Culkin has decided to head back into the spotlight (kinda) by forming a Velvet Underground tribute band that revolves around Pizza.

Highlights include the melancholy ballad ‘Cheese Days’ which is a take on the Velvet Underground original ‘These Days’. Culkin sings ‘Cheese days, I don’t do too much toppings these days, these days I seem to order cheese, and don’t say please, and then I walk away’. Admittedly this is kind of funny but only in a really stupid way and I can’t imagine listening to it more than three or four times, but hey if that’s what Macauley Culkin wants to do with his spare time these days then I guess it’s OK with me.

If anyone cares about the details of the band, it also features four musicians from NYC’s alt-folk scene (who Culkin no doubt met when scoring heroin/ordering pizza) who go by the names of  Matt Colbourn, Phoebe Kreutz, Deenah Vollmer and Austin Kilham, none of which I have ever heard of. The band actually formed way back in February 2012 but have presumably been working on getting those pizza lyrics just right as they only recently started playing gigs at comic conventions.

Macauley Culkin is credited with kazoo, percussion and vocals on this recently recorded demo, which was recroded live at his house a few weeks ago. Watch out for the kazoo solo in the song called ‘Take A Bite Of The Wild Slice’.