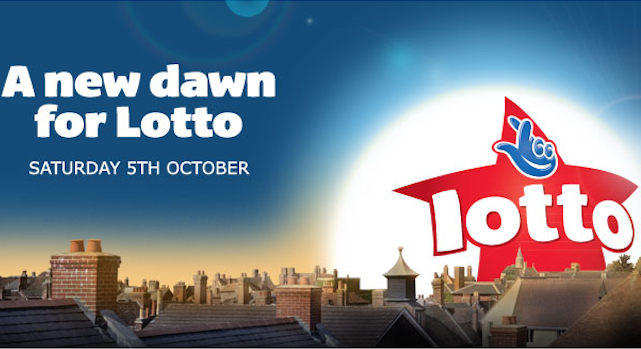 The National Lottery is having a complete overhaul and introducing The New Lotto – which features even more ways to win and looks like it actually might be worth playing again.

My parents have been playing the National Lottery pretty much since its inception and they used to pay for me to have a line every week too when I was a kid but I don’t think I really know anyone else who has ever played it. Despite playing it every week I think we only won big one when my dad won three G’s – we won £10 a bunch of times sure but I don’t really count that as a big win. Anyway when we won that my dad bought me a new guitar which was awesome, even if it was a Yamaha.

Now though it seems that The National Lottery is changing its format and making it a lot easier to win. The New Lotto is starting in the autumn and will cost £2 a line (not sure if this is an increase or not? It used to be £1 a line when me and my parents were playing but this was back in the day) and there are a bunch more ways to win now which gives way more of an incentive to play. The new ways to win are listed below:

Obviously the most exciting thing about this is this raffle option as you have a better chance of winning £20K every time you play rather than winning just through the numbers which is obviously a lot harder.  20K might not sound like £5 million but it would still be pretty awesome to win it. I mean even though it isn’t a huge amount of money it would probably still change your life or at least have a positive impact on it. The £25 increase from £10 is awesome too because £10 can’t really buy you anything these days. They probably should have changed that a while ago.

I think if I won the 20K then I would use the vast majority of it on funding a trip to the World Cup in Brazil next year. It’s always been a dream of mine to go to a country where the World Cup was happening and it’ll be too scary to go to it in Russia and Qatar will be crap and I’ll also be in my mid 30’s, so now is the time to get serious about it really. If there was any money left over I would probably buy a new car, but if I had 20K in my back pocket I could see myself spending a G on a ticket to a game outside a stadium fairly easily. And probably more than once.

Like I said, 20K is a life changing sum of money so it would be pretty interesting to hear about how Sick Chirpse readers would choose to spend it  – perhaps as a downpayment on a new house or on their dream holiday? Let us know in the comments.

To celebrate the New Lotto, The National Lottery is planning two killer Saturdays of lottery action in a row. On October 5th, there will be a £10 million jackpot and 1000 winners of the £20K raffle prize and this will be repeated again the weekend after. That’s a lot of money to be won.I think I’ll be calling my parents up that week and asking if they can pay for me to play again.

Guy Wins Lottery Twice In One Day – Can You Get Any Luckier?

$156 Million Up For Grabs In This Awesome Short Film