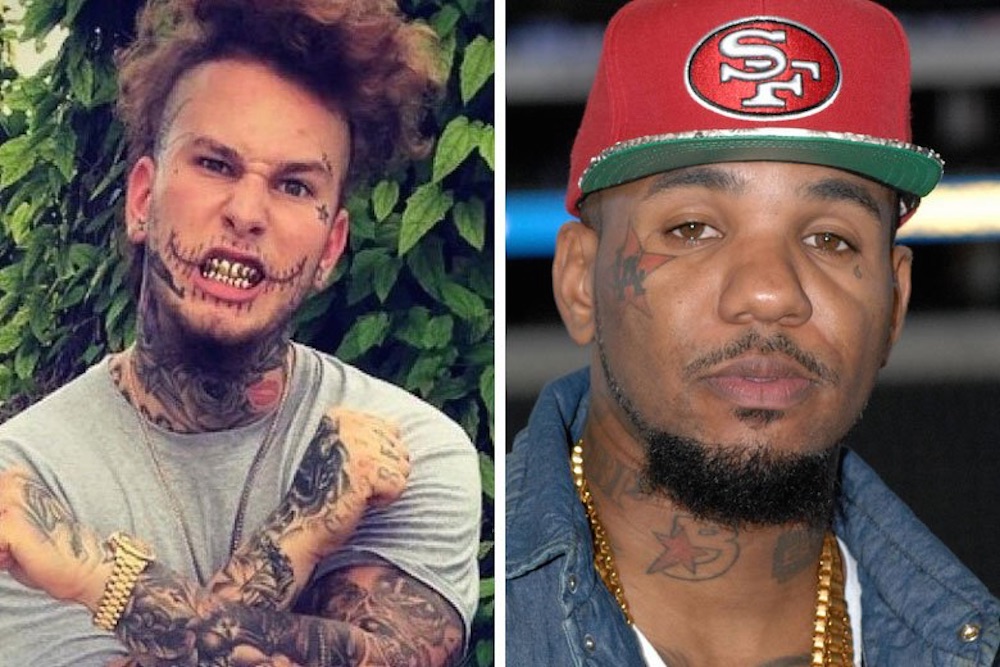 The Game is really up for this one and he’s going to make it a fight to remember – if Stitches doesn’t back out.

Stitches and The Game have been beefing for a while and I don’t even really remember what it was about, only that Stitches called out The Game when he was headed to Miami only to show up at his show and then get knocked out by his manager in a hot second. Pussy.

I’m sure they were fighting about something important though, like how big their gun collection was or how big their dicks were or something. Same thing I guess.

Despite this knockout, Stitches has still been trying to get The Game to fight him (what is this guy, like 12?) and even went as far as to try and get him to agree to a celebrity boxing match, as you can see in the Instagram post below.

Image VIA Is celebrity boxing even a real thing in America? I suppose it’s a pretty good idea/interesting concept in theory. Regardless, Stitches has signed the contract for said boxing match with The Game and seems pretty eager to get it on. That guy in the video also seems pretty excited about calling The Game out about not accepting the fight. So what was The Game’s next move in all this? I mean the fight is inevitably going to end up happening right? Well, on two conditions that seem to work in The Game’s favour. Check this out:

#COMETOLA #iWILLBUYYOURTICKET funny how you pussy’s on my page saying fight a mothafucka that said “if we came to Miami, he was gone kill me”…. So we came to Miami, was comfortable & all over town & then my nigga @Wack100 knocked yo pussy ass out wit one punch…. Then his own homies whooped his ass the next day after he tied to run & got caught…… Honkin the horn, foot on the gas, in park 😂😂😂😂😂 Wack is 1/2 foot shorter & slept yo ass in front of the police…. Niggas know I’m out on bail & on trial facing 10 years so everybody tough knowing if I do anything I’m gettin locked the fuck up n taken from my kids…….. But if you really want mo ass whoopings…. I’ll fly you 1st class to California & @NickyDsss will fuck yo bum ass up #WhiteboyVSWhiteboy !!!! & if you don’t get yo ass knocked out…. I will fight yo pussy ass for FREE in the middle of the street after you sign a waver that you can’t sue me or press charges cause I’m tired of you pussy’s talkin tough on the internet then calling the cops & gettin lawyers after you get pounded out !!!! & all these lil 12 & 13 year old opie lookin ass fans you got gone get yo dumb ass hurt out here playing wit grown men !!!! #CurrentlyOnTrialForWhooping40GloccAss #CurrentlyOnTrialForPunchingACopWhichImNotProudOfButImGoneFightIt #CurrentlyOnTrialFacingFiveOtherChargesAssaultRelated #AndYouDumbFucksTalkinBoutFightSomebodyFromBehindPrivateProfiles #LilAssKids #AnybodyThatsFamousForGettinKnockedOutAintFamous #WackKnockedYouOut #YoHomiesBeatYoAss #AndOfYouComeToCaliSignAWaiverYoGettin2MoreAssWhoopings #iWILLBUYYOUAFIRSTCLASSTICKET #WeBeenToMiamiAndYouGotFuckedUpInYoOwnCity #NowComeToLABitch #iWILLBUYYOURTICKET #1stClass #AndSendAUberLUXtoGetYou #ThisPussyGotJumpedInHipHop #GettinYoAssWhoopedOnCameraIsACareerNow #WinnersCircle A video posted by The Game (@losangelesconfidential) on Dec 15, 2015 at 9:44pm PST

EDIT: Game seems to have removed his video response for some reason, so this is what he basically captioned:

I’ll fly you 1st class to California & @NickyDsss will f*ck yo bum ass up #WhiteboyVSWhiteboy !!!! I will fight yo pussy ass for FREE in the middle of the street after you sign a waver that you can’t sue me or press charges cause I’m tired of you pussy’s talkin tough on the internet then calling the cops & gettin lawyers after you get pounded out.

Yep, that really is how you shut someone down. I mean they challenge you to a celebrity boxing match, but your reply is that you’ll buy them a first class ticket to your hood to fight them in the street for free and beat the absolute crap out of them? Damn that is ruthless – there ain’t no way Stitches can back down from that unless he’s a grade A pussy.

Can’t wait to see this fight play out on Snapchat again, although it’ll probably last even less time than McGregor V Aldo from the weekend if Stitches’ last performance is anything to go by.