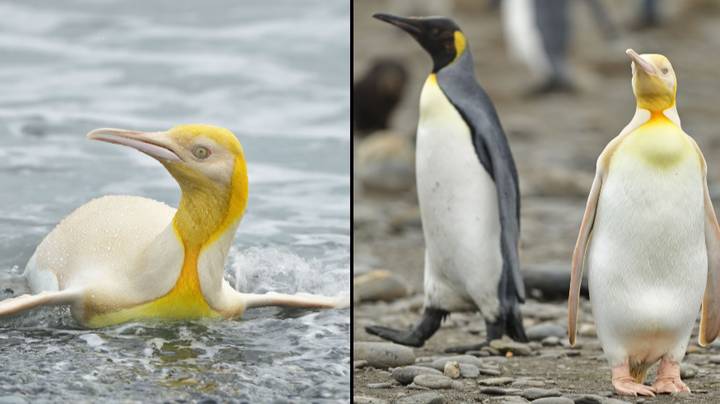 Most of the news this year has been fairly depressing, but here’s something that might cheer you up: the first ever yellow penguin has been captured on film by photographer Yves Adams.

Adams was on a two month photography tour through Antarctica and the South Atlantic in 2019 when he stopped off in the wild islands of South Georgia. He disembarked at Salisbury Plain to photograph the colony of 120,000 king penguins and couldn’t believe it when he spotted a bird with a bright yellow plumage rather than your traditional black feathers.

Thankfully, the penguin was also more than willing to be photographed, so he managed to end up getting some great shots. Yves had this so say about his unique experience: 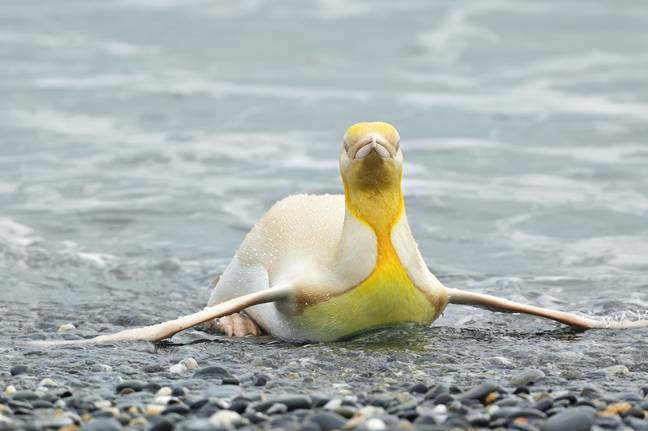 I’d never seen or heard of a yellow penguin before. There were 120,000 birds on that beach and this was the only yellow one there.

They all looked normal except for this one. It really was something else. It was an incredibly unique experience.

This is a leucistic penguin. Its cells don’t create melanin anymore so its black feathers become this yellow and creamy colour.

I was in charge of helping people with equipment and was one of the first people to land on the beach and was unloading the safety equipment and food when we spotted this group of king penguins.

One of the birds looked really strange and when I looked closer it was yellow. We all went crazy when we realised. We dropped all the safety equipment and grabbed our cameras.

We were so lucky the bird landed right where we were. Our view wasn’t blocked by a sea of massive animals. Normally it’s almost impossible to move on this beach because of them all.

It was heaven that he landed by us. If it had been 50 metres away we wouldn’t have been able to get this show of a lifetime.

I’d been dreaming of going to South Georgia for 30 years since I saw my first David Attenborough documentary and I saw these penguins.

It was certainly worth it, even before we saw this yellow penguin. It was awe-inspiring to see thousands of these birds on a rock in the middle of this massive, wild ocean.

Really does sound like it was an awesome time doesn’t it, especially finding this complete freak of nature. Maybe I’ll put South Georgia on my list for when the pandemic is finally over. It’s a long list right now.