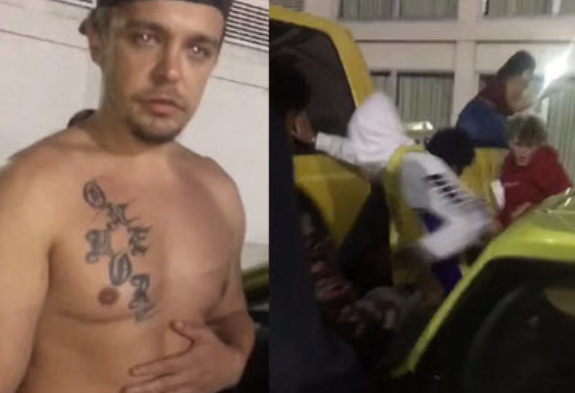 I don’t know which is the bigger L for a grown man to take – being exposed on camera for sending dick pics to a 16-year-old girl, or getting beaten up by a bunch of kids, also on camera.

Unfortunately for this man, he experienced both within a matter of seconds:

Well OK that video cut out rather quickly but I’m sure we can all use our imaginations as to how it carried on. Obviously ganging up on someone and beating the crap out of them isn’t the ideal way for these situations to be solved, but there is something fascinating about a group of youngsters disciplining a grown man like this. I mean did you see the fire in that lad’s eyes before he slammed the car door on him?

Little man is dangerous! I’m not sure if 16 is under the age of consent in whatever state these kids are in or whether they’re just horrified by a 30+ year old man sending dick pics to a 16-year-old girl, but somehow I doubt he’ll be doing it again. Nice try on the “it was my dick but my friend sent the pic” defense though. Really convincing stuff.

For the man who walked in on a dude sexually abusing his son and beat the absolute life out of him, click HERE (warning = graphic images).