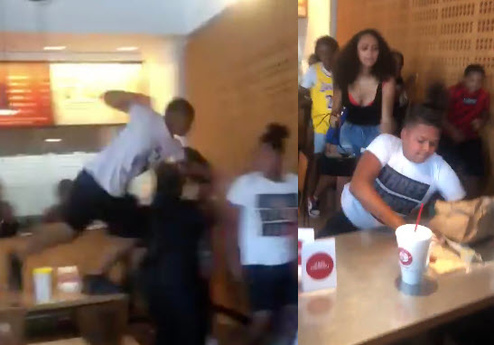 Every once in a while, an internet street fight video pops up where one of the partipants uses a classic WWF/WWF style move to punish his opponent, and amazingly, they’re usually just as effective in real life as they are on TV!

Among the examples we’ve shared over the years are regular civilians using powerbombs, chokeslams, Swanton bombs, German suplexes and Ric Flair chops. Today we have another first – someone using AJ Styles’s flying elbow, except using a table at Chipotle rather than the ring ropes:

As Vince McMahon would say back in the day – what a maneuver!

OK it looked as though the elbow barely phased his opponent and he ended up getting pummeled on the floor afterwards but still, it was a hell of a visual. He also seems to have spliced it up into some sort of highlight reel for himself which is fair enough. You pull off a spontaneous and beautifully executed flying elbow like that in the middle of the restaurant, you’ve earned the right to show it off a little bit. Someone get Triple H on the phone and sign this kid up!

For our pick of the most devastating and humiliating move in wrestling history – the Danshoku Driver – click HERE.