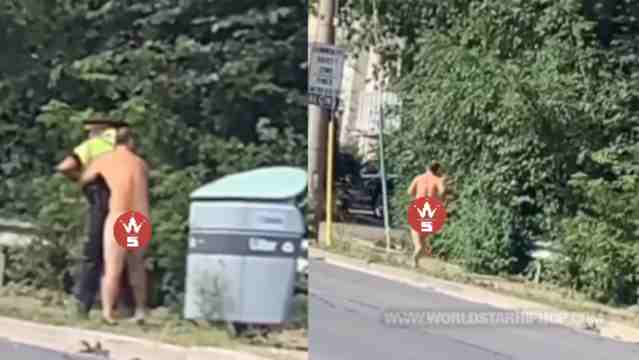 Brock Lesnar would be proud.

Calls about a naked man streaking down Lougheed Highway in Vancouver, Canada, resulted in a police officer wrestling with him and being taken to suplex city – Brock Lesnar style.

After dumping the officer over a guard rail and into the depths below, it took a further four officers to restrain the man – using two tasers simultaneously to get the job done:

Loving the light log afterwards. He wasn’t even in a rush!

Turns out the streaker, Leandro Lamar Roth, is “very well-known” to police and the type of dude who will do things like get off his face on PCP and run naked down a motorway. According to CTV, four officers were injured while making the arrest (one of them seriously), and he’s now been charged with assaulting a police officer. I take it the one who was injured ‘seriously’ is the one who got suplexed off the damn motorway. No way of telling how far he fell but I’d guess that guard rail is there for a reason. Get well soon, whoever you are!

For the time Kurt Angle nearly killed Shane McMahon by suplexing him in a street fight, click HERE.