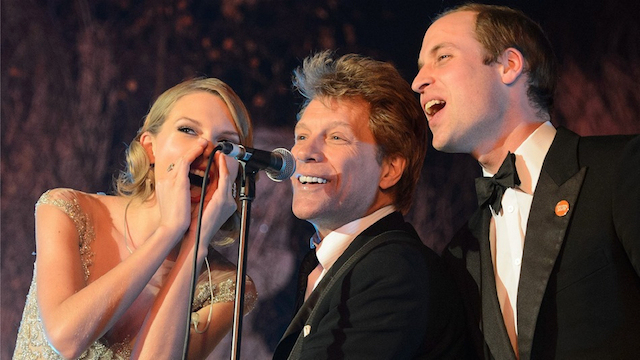 This is even more awful than you imagined it would be.

Prince William, Jon Bon Jovi and Taylor Swift were all in attendance at a charity gala at Kensington Palace for the Prince’s charity Centrepoint – which deals with youth homelessness – on Tuesday night, and for some reason somebody thought it would be a good idea for all three of them to perform an acoustic version of Livin’ On A Prayer together. Spoiler Alert: it wasn’t.

I can understand  maybe getting Taylor Swift and Jon Bon Jovi in to sing Livin On A Prayer because they’re both professional musicians, but I can’t really comprehend why Prince William enters the equation. All the way through it he looks completely awkward and like he’s not enjoying it at all with his hands clasped in front of him, which is juxtaposed by Taylor Swift on the other side of Bon Jovi  – who looks like she might well be completely wasted – and is having the best time ever dancing around, acting out the lyrics, doing the hula, shouting into the mic and generally looking like an idiot.

All the while Bon Jovi struggles on manfully in between them, singing the majority of the lines and strumming his guitar and probably wondering to himself why the hell he decided to show up and let himself be subjected to this. Awkward.