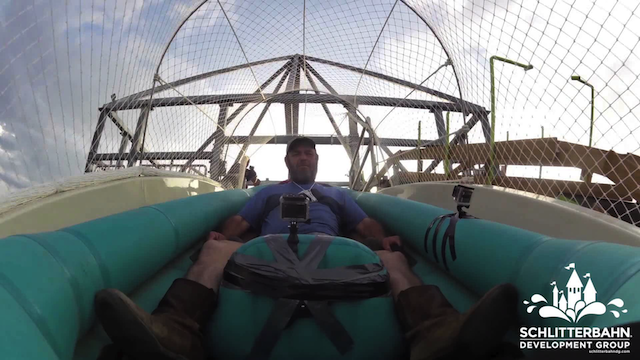 After weeks of testing, finally it’s decided that it’s safe enough to ride.

We’ve posted about the tallest water slide Verruckt in Kansas City a bunch of times before on the site, and were eagerly awaiting its opening on Memorial Day weekend (which was May 26th this year) but unfortunately it was delayed. Apparently this was because they tested out some sandbags on it and they just went flying way off up into the air, but this has neither been confirmed nor denied by anyone in the know – it remains just a rumour, although a completely sick one.

Now though, the water slide has finally been tested by humans (it was in fact the architects who designed it that took the plunge, literally putting their careers on the line) and it looks about as terrifying as you imagine. Of course, they set up GoPro cameras to film the whole thing and they capture it perfectly, from the hair raising speeds to the shock of the two guys when they’ve finished riding it. One of them can barely even make it out of the boat he seems so shellshocked.

Looks like it’s safe to ride, but would you be willing to take the plunge if you ever find yourself in Kansas City?