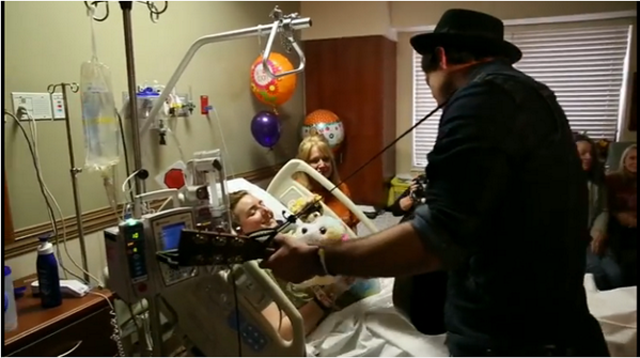 A nice note to end the turbulence of the music leg of this year’s SXSW festival.

A nice note to end the turbulence of this year’s music leg of the SXSW festival. One of the unfortunate victims of the drunk driving crash that killed two people and injured 23 others has had her favourite band, Jared & The Mill, visit her in hospital to play a private gig seeing as she had to miss their concert due to the events. Already a superfan, and in contact with the members since meeting them at last year’s SXSW, it’s not as incredibly heartwarming as it may first seem in the Romantic sense of the word but it’s still quite sweet.

Blah… ignore me, I’m just being cynical. She’s the epitome of the perfect fan. She saw them playing on the street, kept in touch and spread the word about them and still continues to do so since here I am writing about them! She is amazing, and I am glad they are grateful. Artists need to remember this is the real reason you go to SXSW – not to parade around like the ‘Big Spender’ scene from Sweet Charity at corporate branded events, no. It’s for people like this. I guess it’s a nice to write about something cute happening at the festival for a change that you guys actually want to read about (since no one seems to care, or even realise the other two parts of the festival – SXSW Film & SXSW Interactive even exist).

The girl, whose name is Mason luckily does not remember anything about the accident or being rushed to ER and has been gifted a broken leg, a fractured neck and a broken nose from the ordeal (doctors say she’ll be OK). But she seems in good spirits, surrounded by family and friends and has enough energy to request their song “Just For Now” in jest, for its apt lyrics.

Watch the video of the performance below (via Texas Statesman):

Tyler, The Creator Arrested At SXSW For Inciting A Riot; But It’s A Lot More Than That

VIDEO: Hipsters Get Tricked Into Talking About Fake Bands At SXSW

VIDEO: Woman Pukes All Over Lady Gaga At SXSW Festival