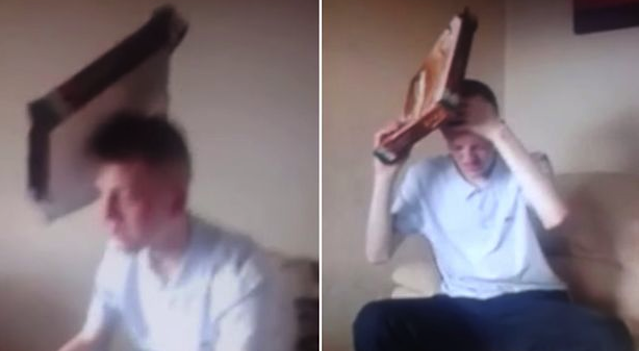 Thank god someone had a video camera ready for when he woke up.

Getting pranked at a party when you pass out is part and parcel of growing up  – like this guy found out – but they’re very rarely that creative and usually just involve shaving someone’s pubes or eyebrows or piling junk on top of them.

Some 19 year olds actually surpassed themselves with this one though. A guy called Gregory Bowman was the first to pass out at a heavy session and his mates decided to drunkenly superglue a pizza box to his head.

And when we say superglue we really do mean superglue, as he has to literally rip it off, alongside a load of his scalp. Ouch. Bowman still sees the funny side of the prank though which makes him a bit of a hero rather than a complete and utter loser.

Remember – don’t pass out with your shoes on or you might get a prank like this – or this other amazing one – playing on you.