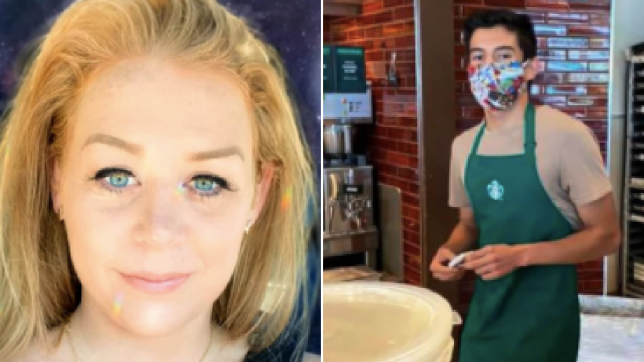 A San Diego woman who tried to shame a Starbucks barista on Facebook because he asked her to wear a face mask in the store is now suing him for half of the $100k in tips supporters raised for him on GoFundMe, because she thinks she’s the victim in all this.

Back in June, Amber Gilles posted a picture of Lenin Gutierrez on her Facebook page, writing:

Meet Lenen from Starbucks who refused to serve me cause I’m not wearing a mask. Next time I will wait for cops and bring a medical exemption.

The post, which has since been taken down, backfired in her face as people scolded Amber for being a bitch and instead started a fundraiser for Gutierrez, which racked up $105,450, according to Yahoo.

Gilles confirmed this week to KGTV that she’d been speaking with lawyers about pursuing a lawsuit to get half of the money raised for Gutierrez.

I’ve been discriminated against. I’m the one who’s sick.

She says that she reason she refused to wear a mask is because she had an ovarian cyst in 2015 and also she has asthma and says masks give her acne and she doesn’t think they work anyway and so for that reason she’s entitled to half of the $100k raised for the barista she publicly berated.

Even if all that were valid, does that really give her the right to try and shame this 18-year-old Starbucks barista on Facebook who’s working a minumum wage job and was just trying to enforce the rules that his employer set? Worse still, the money she’s trying to sue him for is going towards his education and charity:

Gutierrez has already received the money from his GoFundMe campaign. In a video posted on the fundraiser’s page, he said he planned to use the cash to study kinesiology at Cal State Fullerton and pursue his dream of becoming a dancer. He said he also wanted to donate some of the money to charity.

The good news is that Gutierrez is already lawyered up and so is ready for anything that Gilles comes at him with. I don’t think he has anything to worry about but best of luck to the lad anyway. Don’t spend that $105k all at once.

For the man who went viral after his Starbucks coffee made him poop 11 times, click HERE.