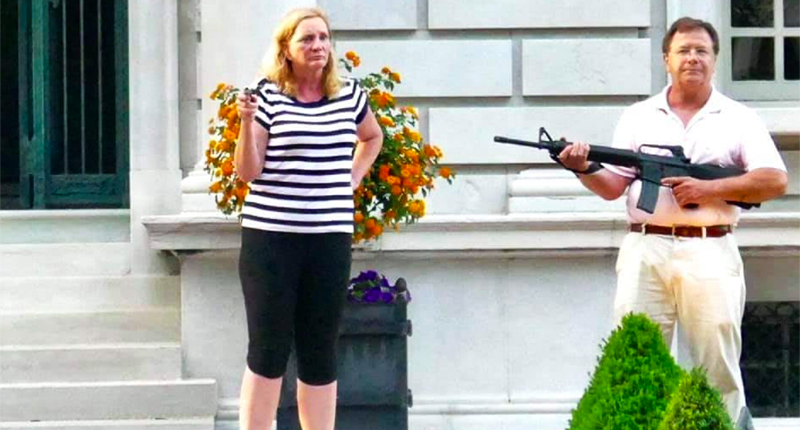 Black Lives Matter protests are still a thing surprisingly – fully expected them to have dropped off by now so fair play for that – and there was another crazy incident in St Louis, Missouri yesterday after a white couple were so scared by a march going past their mansion that they came out onto the front lawn with massive guns and threatened everyone to keep moving.

The protesters were marching for the resignation of the mayor and by all intents and purposes it looks as though the march was fairly peaceful, although I can understand why these two – who are actually a couple of high powered lawyers in the city – might have been intimidated by them, especially given some of the violence and looting we’ve seen in a minority of cases. Definitely don’t think that the right way to deal with this and not to perpetuate stereotypes is to head out onto the lawn and point guns at everyone passing who don’t seem to be doing anything violent, but I guess I’m not from a red state in America am I?

White people in St. Louis who are so threatened by people marching in support of #BlackLivesMatter that they come out of their house and point guns at protesters are a perfect metaphor for why these protests are necessary. Also they should be arrested.pic.twitter.com/7OQhhCJ6KH

A couple has come out of their house and is pointing guns at protesters in their neighborhood #StLouis #lydakrewson pic.twitter.com/ZJ8a553PAU

That is kinda terrifying isn’t it, especially the woman. It’s like she’s almost willing someone to do something bad – like step on her lawn? – so she can start firing off bullets.

Thankfully that didn’t happen and nobody was hurt, but every time I see a video like this it fills me with dread at the state of America and makes me think about everything that isn’t being caught on film. Land of the goddamn free.

For more of the same, check out when this American woman made guns a fashion statement. Iconic.