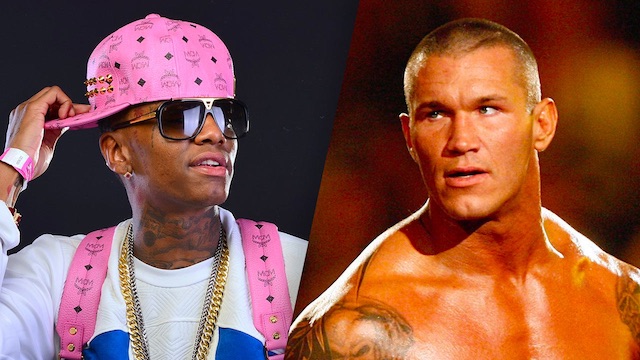 When it comes to professional wrestling, I think that most of us probably realise now that the storylines and characters are all fake and scripted but that there is some level of physical pain and discomfort involved in stacked grown men and women beating the crap out of each other, even if it’s essentially choreographed.

For some reason though, Soulja Boy isn’t happy with the way that this is being portrayed on our television sets and decided to go off on one about it on his Twitter account, saying that the rap game was faker than WWE, which caused Randy Orton to get involved and the two of them to go at it for a bit on the social media platform.

Fake? Dare this prick to step up. He dont like movies? Consider us actors that do stunts, without pads 200 days a year and don’t bitch when we get surgically repaired and come right back. Consider us 100 times tougher then anyone you’ve come across. Aint nuthin but a bitch ass… https://t.co/D3CQb9IxEO

Ps @sanbenito would beat the fuck outta you. Why? How? Because he’s seen our world. Respects it and knows what it takes and finds himself lucky to be a part of it. You wanna talk fake? Pawn that cheap ass chain and come work for it you one hit wonder ass mutha fucka https://t.co/zJPMmuqskr

Do u know who the fuck I am. I’ll bring the REAL to wrestling don’t play with me. Randy Ortonnnnnnnn?????????? https://t.co/Yx9cfODoIJ

‘Crank that’ came out in ‘07 you had a hell of a year. Serious $. Hats off to ya my dude. Here’s the thing tho… I like rap. I bump that shit all day whether it’s tunechi, meek, JZ…but you call what I do to survive, fake? Fuck that. Come to my world and say that. Dare ya https://t.co/P3qx5bu6ks

If you mad because I spit facts just say that. What you do is FAKE and I stand on that. What I do is REAL. Come to your world? Lol welcome to Soulja World 🌎 🤣😩 https://t.co/KofrYkD95J

U spittin facts? Seems like all you spittin is the same mess you rap about. Nut. Clear your throat my dawg, and be there. Enough talk. Back it up. https://t.co/rN8JY5AX3q

Lol that was entertaining wasn’t it? In fairness, Randy Orton is exactly right but it’s kinda weird that he’s getting so triggered and butthurt by Soulja Boy saying this stuff that he needs to engage in a beef with him about it. Just don’t engage man?

Of course, you can imagine that Vince McMahon might have even asked Randy to crank the fires so the two of them can get involved in a hastily arranged WrestleMania match tag team match this year. Definitely the only way that this is going to end up.

For more of the same, check out this former WWE diva sharing a story of Randy Orton bullying her. Maybe he isn’t such a great guy either?