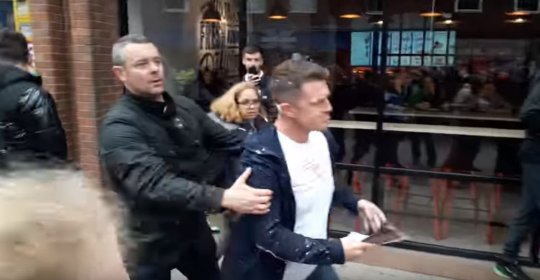 The European Elections that were never supposed to be a involved in thanks to Brexit are now upon us and a whole bunch of idiots have crawled out of the woodwork to try and gain power including everybody’s favourite political journalist (?) Tommy Robinson.

Tommy was out campaigning on the streets of Bury in Greater Manchester yesterday, but it seems like not everyone out there is that keen on hims obtaining a position of power judging by the video below. It’s pretty fun just watching it but if you need any more convincing then it involves someone throwing a milkshake that smacks Robinson right on the head, whilst someone off camera calls him a knobhead and Robinson refers to him as ‘some Muslim supporter’.

Yeah it’s a shame you don’t actually get to see the milkshake hit him in the face but you kinda see the aftermath and that’s cool. Love everyone just shouting knobhead as well, kinda worth tuning in just for that.

Not sure how this is going to affect his chances of being elected as an MEP, but it’s still funny to see. To be honest, would be pretty funny to see this happen to any UK politician given the current state of affairs. Tommy is probably one of the best to get though sure.

Also side note – kinda cool that Bury of all places has a Tim Hortons. Love those Timbits.

For more Tommy Robinson, check him out calling himself the King Of Islam whilst on a coke bender. Controversial.