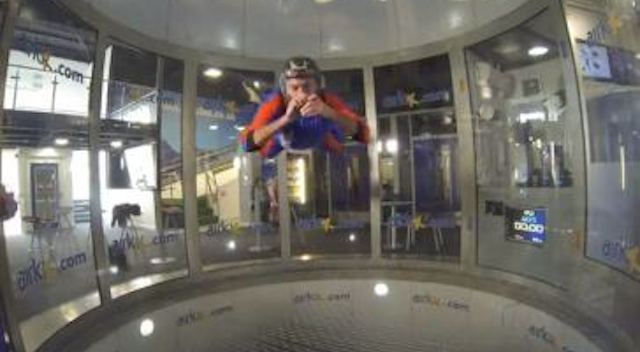 The guy performing this stunt then tried to sell it on eBay only to receive one bid of less than a pound. It’s still a pretty impressive stunt though.

Solving a Rubik’s cube is difficult at the best of time, but I probably wouldn’t want to attempt it whilst I was skydiving – I would probably be too busy bricking it as I hurtled towards the Earth.

I wouldn’t be too keen on attempting to solve it whilst I was in an Airkix wind tunnel that was designed for indoor sky diving (what’s the point? So you can get your technique right?) either, but you can find one of these in Basingstoke and someone was kind enough to go in there and attempt to solve one. They even used a head mounted GoPro camera so you can see it all from their POV.

Unbelievably, they manage to do it in less than a minute which is a pretty solid effort considering the conditions. There’s one point of the video where it doesn’t even look like they can put two hands on it because the winds are so strong.

Also unbelievably, the YouTube account that uploaded this video are also now trying to sell the Rubik’s cube that was used in the video like it’s some kind of collector’s item. You can check out the listing here (it’s currently received one bid of less than a pound, nice work guys) and read the description below:

‘This incredible speed cube was used by Feliks Zemdegs when he set the current world record for the 3x3x3 cube.

This very cube was used by me when I set a new world record and world first for doing a Rubik Cube in a vertical wind tunnel.

The winning bidder has the option for the cube to be signed by myself.

As soon as you rotate the cube a few times you realise why. It has astonishingly smooth rotational movement but is also very tight and sturdy. As a result, the cube is very resistant to popped pieces, the curse of the true speed cuber.

This cube is version 5 of the ZhanChi.

The cube has no stickers. The way the Zhanchi is made allows different coloured plastic to be used to produce each of the 6 coloured sides. The cube has standard colours – white, yellow, red, green, blue, orange.’

It sounds pretty good from that description, and at its current price is actually cheaper than a regular Rubik’s cube so might be worth checking out if you’re after one. I can’t see it going much higher than this price to be honest – I mean why the hell would anyone want this particular Rubik’s cube from this video?

It’s not a mindblowing prop or anything and it’s not even like the video is that mindblowing either, although it is pretty quirky and original. I just can’t believe that anyone would think that they would actually get rich quick from selling what is literally a piece of novelty junk. Not even interesting or original novelty junk either. Baffling.