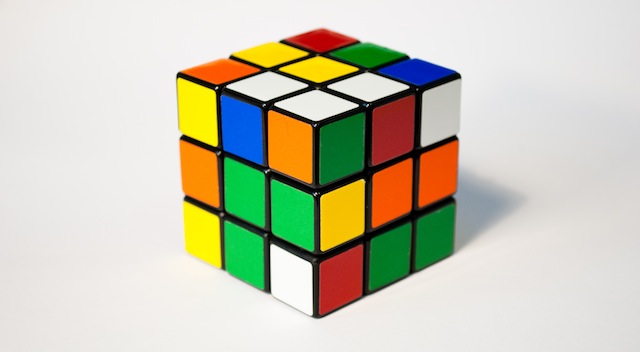 Ravi Fernando is an uber-Lord of the Rubik’s cube – solving it whilst juggling. But why the frig do we like doing puzzles at all? They’re pointless surely?

Unless you are Ravi Fernando I’m guessing you answered no to the question in the title. I hate puzzles, they do my tits in, I hate them. I think I basically hate anything that’s difficult. Some people thrive on challenges but I thrive on the sofa watching Jeremy Kyle. It’s not my fault. So if you gave me a Rubik’s cube I would fiddle with it for 3 minutes then start throwing it at walls like a vodka fuelled gorilla during a particularly hot mating season. Some people, however, find the Rubik’s cube so easy they need to make it harder for themselves. I’ve seen people breaking the record for the fastest time before, here’s someone doing it in about 8s back in 2006:

Yeah, so that would have taken me 8 or 9 lifetimes to complete. But the mad head in this next video solves the puzzle using one hand – pretty tricky – but not tricky enough for this young maths student Ravi, oh no. He juggles with two balls at the same time as solving it. What a puzzle Lord. I can’t juggle, I can’t solve the Rubik’s cube, I couldn’t even change a Rubik’s cube with one hand. I don’t know how or why he’s doing it, but he is, and he’s doing it with a smile. Ravi I salute you.

Puzzles are a weird thing if you think about it for long enough, they are basically pointless, but there’s something about problem solving that just feels good. Who couldn’t smile whilst slotting in the last piece of a jigsaw puzzle or whilst completing the last line of a Sudoku?  There was news from some experiments in Whipsnade Zoo reported last week where chimps solved puzzles for treats. No surprise the clever little chaps figured them out to get a luxury Brazil nut. But the surprise came when they put some versions of the puzzle into other chimp’s cages where there was no reward given for solving the same puzzle. And guess what, they still solved them, and kept solving them despite receiving no snacks at all. It seems that part of the reason us humans got so successful at ruling the earth is that we feel a sense of reward simply for figuring things out. So back in the mists of time when we saw fire and we figured out how to make it, or we picked up a stick and realised we could stab someone with it, we were well on the way to global domination.

I still hate puzzles though.