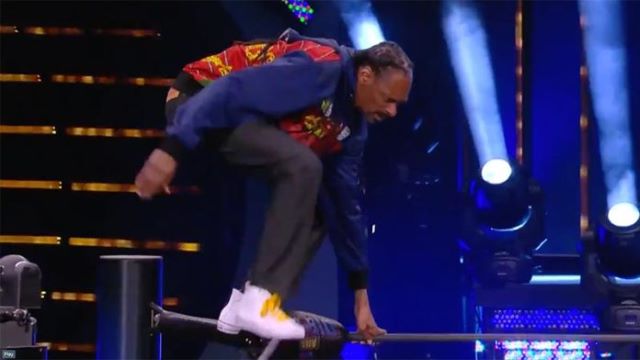 Aside from Ronda Rousey at Wrestlemania a few years ago, I don’t think there’s even been a non-wrestler who’s entered a wrestling ring and not ended up completely embarrassing themselves by trying to actually wrestle with the pros.

At last night’s AEW Dynamite: New Year’s Smash, Snoop Dogg showed up and hit probably the worst frog splash in pro wrestling history. Well, I guess you could call it a frog splash:

Snoop Dogg’s frog splash leaves something to be desired… pic.twitter.com/1js4xpJ0vZ

Jesus, how close do you want him Snoop? He basically just jumped straight up in the air and dropped back down again with no distance whatsoever. Jimmy ‘Superfly’ Snuka will be rolling in his grave!

Turns out it was more effective than it looked though as he ended up getting the 3-count. Go Snoop!

Snoop’s cousin, WWE wrestler Sasha Banks, was not impressed with the Snoopy Splash:

Snoop featured at WrestleMania XXIV in 2008 and hosted WWE RAW the following year. Snoop is also in the WWE Hall of Fame, so I wonder how Vince McMahon feels about him showing up for rival promotion AEW?

In any case, as awful as that splash was, at least he managed not to slip off the top rope and break his neck. But let’s just hope he doesn’t quit the day job doing Just Eat adverts or whatever he’s up to these days.

Speaking of which, did you hear how much Snoop got paid for those adverts? Holy shit.