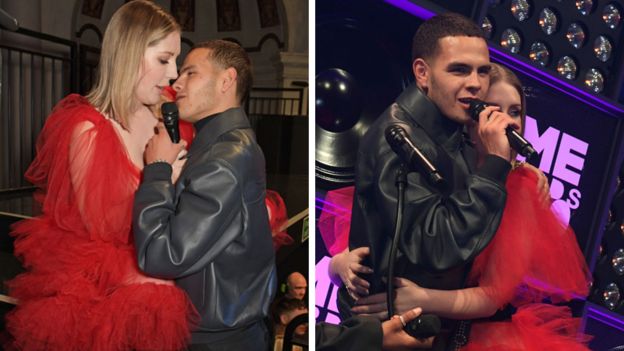 It was a big night for Slowthai last night at the NME awards but he proceeded to well and truly screw it up for himself by pretty much sexually harassing presenter Katherine Ryan and then trying to fight a fan. Way to blow it idiot.

Anyway, there’s only one way you can really come back from something like this and that’s to completely own it with your apology and Slowthai has at least tried to do this with the following grovel on Twitter:

(2/2) katherine, you are a master at your craft and next time i’ll take my seat and leave the comedy to you. to any woman or man who saw a reflection of situations they’ve been in in those videos, i am sorry. i promise to do better. let’s talk here.

I mean if you’re gonna do something like that I suppose you have to hang your head in shame and own it and try and do better. Not sure if anyone is going to buy that though.

Katherine Ryan herself doesn’t seem too bothered about it which might count in his favour I suppose:

I knew you were joking and congratulations on your very award-worthy album! I hope you know that a bad day on social media passes so quickly. Everything will be better tomorrow. Xx

Even though she knows he was joking – or at least is trying to be safe about it – this might end up having an adverse reaction on his career. I kinda get the picture that he’s a kind of Oli Sykes/Conor McGregor/Boris Johnson kinda figure though and no matter how much shit he ends up doing he’s still gonna end up at the top. So it goes.

If you missed the original incident, then click here to see videos of the creepiness and then the fight. Awful.