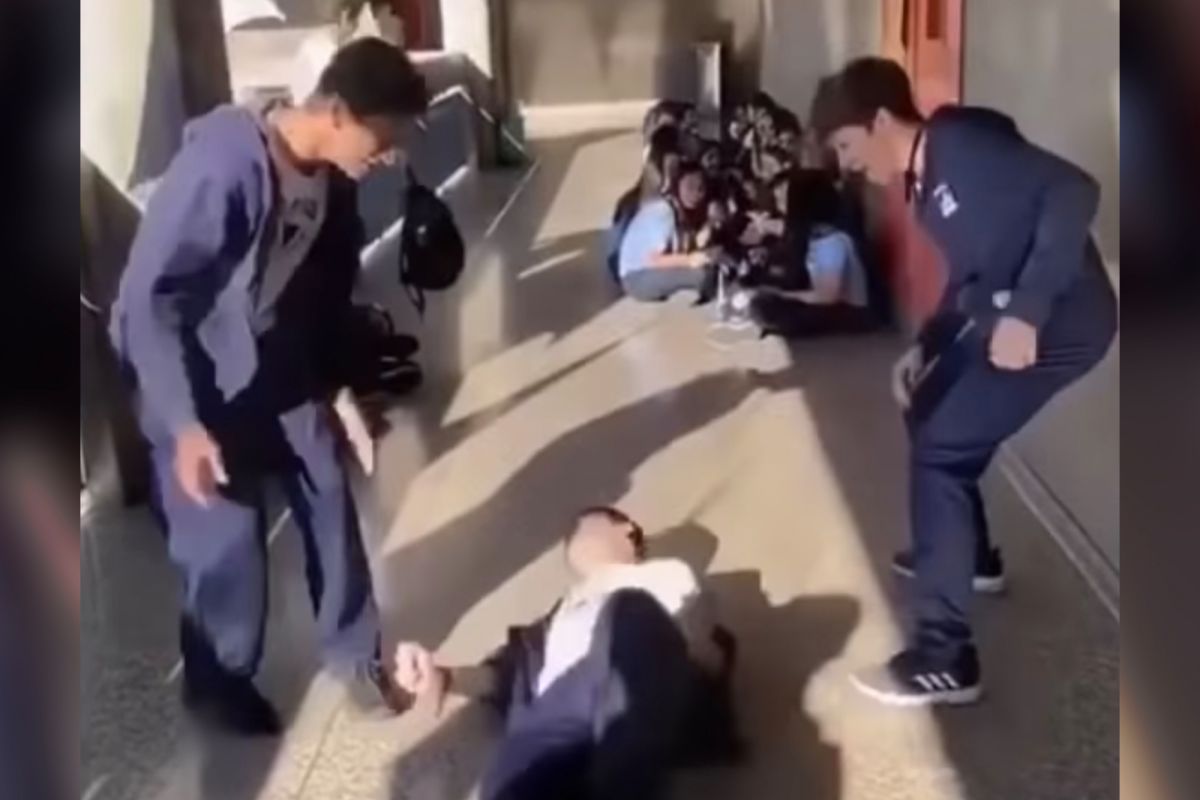 This new trend going viral on TikTok is sending teenagers to hospital.

We’ve seen a ton of these dumb viral internet trends over the years – teenagers eating Tide pods, setting themselves on fire, knocking each other out, sucking shot glasses to get lips like Kylie Jenner, ‘jelqing‘ and so forth.

I’m pretty confident that this new ‘skull-breaker challenge’ taking TikTok by storm is the dumbest trend of the lot though.

For the thankfully uninitiated, the viral stunt originated in Spain, where three students were filmed jumping next to each other as the two bookending buddies kick the middle guy’s feet out from under him. Go figure: The harebrained act sends the victim toppling to the ground, landing on their back and hitting the back of their head in the process. For whatever reason, the “skull-breaker challenge” took TikTok by storm, resulting in injuries across the US.

The #skullbreakerchallenge which is currently trending on #tiktok is fatal. Please pay attention to our kids. pic.twitter.com/SQi9RPpk6j

Warning : Skullbreaker Challenge is trending I urge you all to show your children and parents and teach them this is really dangerous. It can break skull and can cause some serious problem.#skullbreakerchallenge pic.twitter.com/OQQ8idnbfA

How stupid is that? Definitely one of the dumbest things we’ve ever seen on the internet and that’s saying something. It’s just one of those things that goes ridiculously viral out of nowhere despite (or because) it’s completely dangerous and ill-advised.

So many of these videos are going viral that #StopTheSkullBreakerChallenge has begun to trend on Twitter, so that’s good. Even doctors are releasing fake skull breaker videos on TikTok to warn of the dangers:

Doctors have condemned the practice for its potentially fatal outcome, reports Yahoo News. The “skull-breaker challenge” can cause a host of “serious and life-threatening injuries,” ranging from “skull fracture to paralysis, and death,” according to Nathan Richards, MD, an internal medicine and pediatrics specialist at the Ohio State University Wexner Medical Center.

Denise Klinkner, a pediatric surgeon at the Mayo Clinic in Minnesota seconded Richards’ statement to Yahoo News. “In spite of knowing this is the intent, the falling teen rapidly lands without blocking the fall, leading to at minimum a concussion,” she says. Klinkner adds that “an outstretched hand to block the fall may lead to a broken wrist or arm.”

So yeah, if anyone ever asks you to jump in the air for whatever reason – don’t. Or if you see someone else being asked to do the same – stop them.

Keep away from the ‘perineum sunning’ trend also – Josh Brolin tried it and all he got for his troubles was a sunburnt asshole.