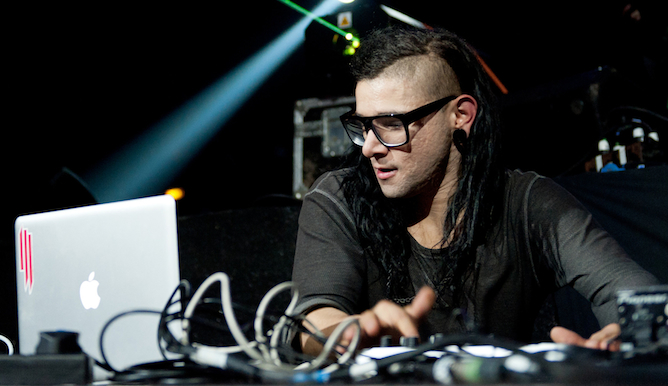 Skrillex gets so into his performance in Mexico he runs into his DJ desk at full speed and knocks himself out, just as the bass drops.

Skrillex gets knocked out is such a killer title I don’t really need to say else about it, and in any case the clip is only 7 seconds long so there really isn’t much to say about it at all. Skrillex is just killing it (probably) at some gig he’s playing in Mexico and running around the stage when for some reason he runs straight into his weirdass DJ desk and smashes himself in the face hard. It looks really painful.

The best part is though that the bass drops exactly as he does, although it probably isn’t live music from Skrillex and someone has just edited it that way. It still rules though, even if for some reason you actually think that Skrillex is cool then there’s no way you can deny that this isn’t completely hilarious.

Some people on message boards have been saying that Skrillex should be behind the decks mixing rather than running around the stage but with so many people at the front of the stage it kinda looks like this is the end of the Skrillex show and he’s saying bye to everyone before one last drop or something, so it’s probably excusable he isn’t mixing right then.

In any case I think at a Skrillex show there’s gotta be some times where he just runs around the stage to get the crowd buzzing and the energy going right? If this also results in Skrillex knocking himself out and looking like an idiot as the video clip inevitable goes viral then I’m all the more for it. It seems like Skrillex is always giving back to the fans. What a guy.

Check out the video of Skrillex getting knocked out below. Ouch.