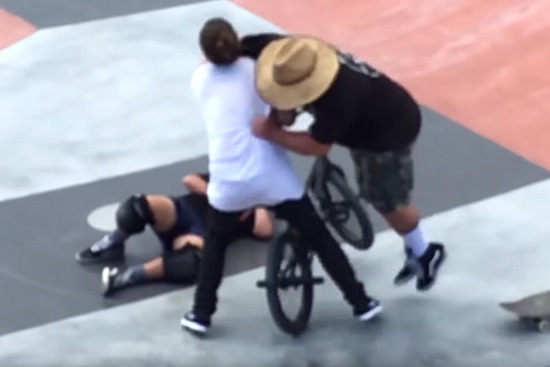 One of the first rules of going to the skate park is to not take your dad with you, but conversely the second rule is probably if you do bring your dad to the skate park, then you probably want to keep a leash on him and make sure he doesn’t do anything completely uncool like the guy in the video below. Chances are everyone already thinks you’re a dork for coming with your dad – you don’t wanna make it any worse, right?

I’ll let the guy who shot the video below describe what happened with it – he’s got a really great way with words:

There I was, filming a Manny 180 when a 12-year-old child snakes my boy like BLAOW, next thing you know BANG, the kids dad came up and shoulder charged him after not even seeing what happened.

Ouch, that’s one hell of a slam and it’s not even like the BMXer was shouting at the kid despite the fact he snaked him. But old dad just did not give a fuck about it did he?

Clothesline first, ask questions later – a complete lack of skatepark etiquette. I bet that kid isn’t gonna be welcome there anytime soon. Probably too embarrassed to go back anyway. Kinda looks like his dad is coming for seconds at the end of the video which isn’t so cool either.

For more embarrassing parents at the skate park, check out this drunk mom trying to drop in. No, no, no.