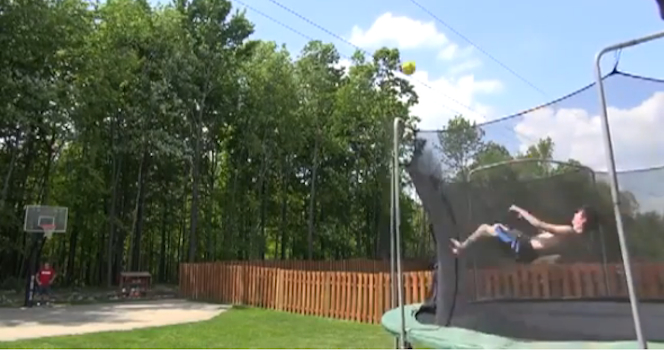 I don’t know if that description really does this justice but this is one of the most phenomenal pieces of skill I’ve ever seen.

Wow, I don’t know if my description of this in the title really did this justice as it is seriously hard to describe, but it is also seriously completely and utterly awesome. Basically this guy called  Kevin Libertowski – who seems to be a school athlete from somewhere in Ohio who is also a sick trampolinist – uploaded this clip the other day of what could be the sickest trick ever.

If you’ve watched it above then you’ll probably already agree with me. It’s just completely mental how he can flip over like that and fire the ball from between his feet so accurately from so far AND while he’s doing a flip. I mean I probably wouldn’t even be able to throw a basketball into the net from that far out, let alone with my feet whilst doing some trampoline flips. I bet he must have tried it so many times before he actually nailed that and I guess this is evident in his celebrations when it does finally go in. Fair play though dude, you did completely nail it.

Apologies about the preroll too but there’s literally no videos of it on the internet that don’t have one.