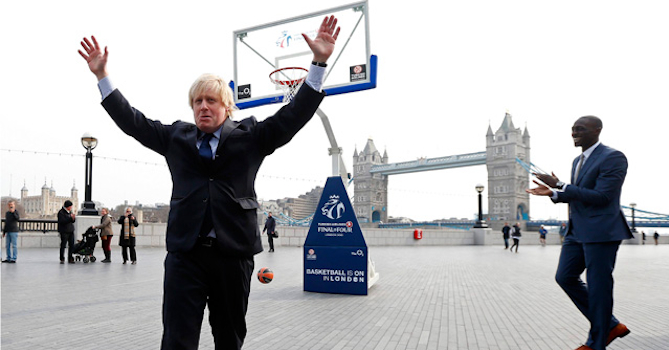 Boris Johnson seems like a pretty popular guy, and his popularity is probably going to increase even more after this footage of him hitting an amazing basketball trick shot emerged today.

Is there nothing that Boris Johnson can’t do? Aside from being a relatively popular Tory (which is a miracle in itself) he’s always getting involved with dumb stuff like getting stuck on a zipline or waving the Olympic flag like an idiot, or my personal favourite when he was riding a Boris bike around the canals one day when me and a bunch of buddies were sailing down on rubber dinghies and he came over and said he really liked what we were doing.

In short, he’s a sickhead. I don’t really know anything about any of his policies but his affability is kinda what you need in a politician. It’s kinda the same thing as why Americans voted for George Bush I guess – you would just probably rather have a beer with him than the other candidates or something.

Anyway, today he completely nailed it and made himself look like even more of a sickhead by completely owning a basketball shot on ITN. I’m not really sure what the guy was doing shooting hoops on TV instead of running the city of London, but I guess you have to make PR stunts like this every now and again to uphold your image of being a complete brap.

Again, I don’t know what he was promoting or what he was doing on a basketball court, but some black guy hands him the ball and he faces away from the basket and tosses the ball back over his head and BOOM, it hits the basket perfectly and Boris looks like a complete sickhead. He’s a complete dick about it as well, saying that ‘to be very clear, I was saving that up – I could have done it at any time’ in a little interview after he nailed it, which only serve to make him look even cooler. What a brap.