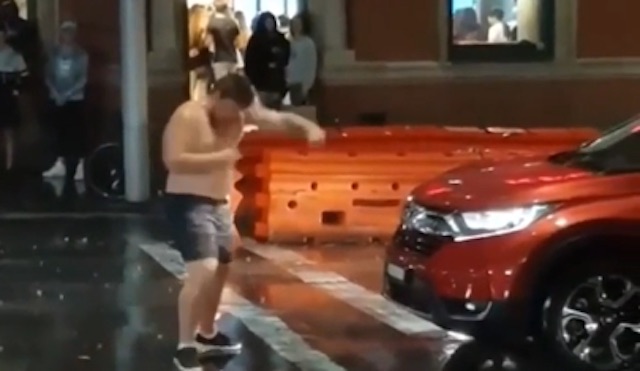 It’s fair to say that we’ve all probably done some things that we regret when we’ve been blackout drunk, but hopefully there hasn’t been someone around filming it and then posting it on the internet for the entire world to enjoy your embarrassment.

The same sadly (for him at least) can’t be said of this Australian guy over in the Sydney Central Business District. I’m not sure that anyone knows why, but he decided to take off his shirt in the middle of a humongous rain storm and then run out in the middle of the road and pick a fight with a massive SUV. Just to top it all off, it happened to take place in front of a KFC, where I imagine the guy went immediately after all this and attempted to buy some popcorn chicken and a few wings.

Take a look at the quite frankly ridiculous footage below:

Wow. I love the way he literally thinks that he’s Conor McGregor (clearly a casual fan) in the Octagon with the vast array of moves he’s pulling out there and also how he completely styles out his spin into just walking off to go get those succulent chicken wings.

Also really great how nobody standing outside the chicken shop – I guess that’s a cool place to stand in Sydney late at night – gives a shit about what he’s doing. Probably see it every week. Good thing the guy standing on this side of the road had his wits about him.

For more of the same, check out this shirtless guy beat off four cops attacking him with batons. What is it about these dudes?