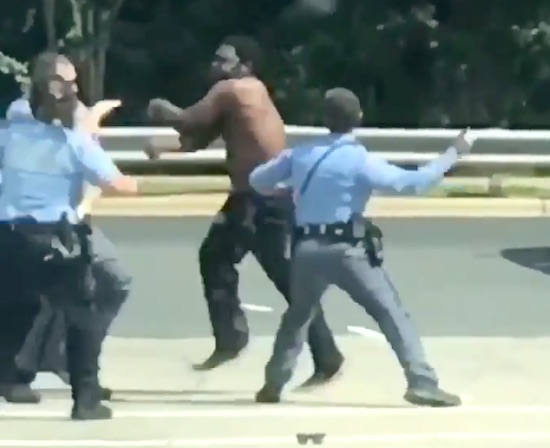 We all know that there are a hell of a lot of drugs out there that seemingly give you super strength and make you do do crazy shit, and here’s another video of someone out of their mind on something and acting like that.

The video is taken from Martin Luther King Boulevard in Raleigh, North Carolina where some black dude is wandering around topless with the police trying to restrain him and failing miserably. There are literally four cops attacking him and trying to get him down, whacking him with batons but he just isn’t having it and manages to fight them off.

Really impressive to be honest:

Hot damn that guy just isn’t taking no for an answer is he? The most surprising thing about this video though surely is the fact that none of the cops just whip out their guns and pop a cap in him – isn’t that what they do in America when they’re faced with a problem like this that they can’t solve? Great restraint from them although I imagine they probably got their guns out just as this video was ending. Bastards.

For more of the same, check out this naked man who got stuck in a gate and blamed it on hunting ghosts. Believable.