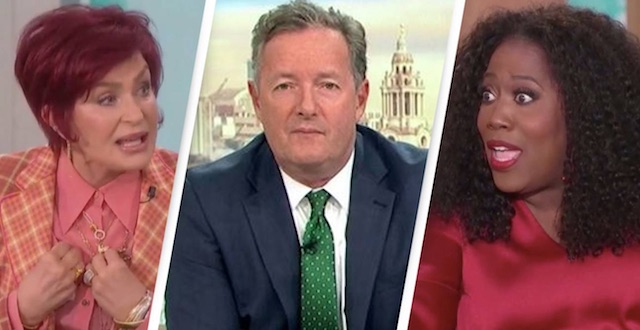 The Meghan Markle/Piers Morgan situation continues to affect people in ways that we didn’t think were possible, as Sharon Osbourne of all people has been accused of gaslighting her co-host on CBS’s ‘The Talk’ about racism after she attempted to defend the former ‘Good Morning Britain’ presenter for his treatment of Meghan Markle. Strap in tight for this one because it goes all over the place.

OK, so the situation began when Piers quit/was fired from GMB on Monday and Sharon immediately tweeted her support for him, saying the following:

. @piersmorgan I am with you. I stand by you. People forget that you’re paid for your opinion and that you’re just speaking your truth.

Inevitably this came up on her CBS talk show ‘The Talk’, where she revealed that people had been calling her racist due to her support of her friend:

Why is it that because I supported a longtime friend and work colleague for years, people go ‘well you must be racist because he’s racist.

No. I support his freedom of speech. I’m not racist and neither is Piers racist. It’s a terrible, evil word to call anyone that’s not knowledge of that.’

What have I ever said about anybody that’s racist? It’s not within me. It’s not in my soul.

This then led to this incredible segment of the show where her co-host Sheryl Underwood tried to explain the racial implications of how Piers had been acting which somehow led to Osbourne breaking down in tears and saying that neither her nor Piers had ever said anything resembling racism and she couldn’t believe the persecution that she was now facing:

Sharon Osbourne gets angry with fellow cohost Sheryl Underwood on #TheTalk after being questioned about her support for Piers Morgan’s comments about Meghan Markle. pic.twitter.com/aNKwtMnmtD

Wow. I’m not even going to try and explain how I feel about this because it’s such a complicated issue, but I think that tweet above does a pretty good job of summing up the situation. These tweets below have also been highlighted by several publications for the same reason:

…to both center herself & uphold the white privilege of herself and her friend, Piers Morgan.

I found her willfully tone-deaf display & tactics both revolting & dangerous considering the power dynamics on the show. I worry you & Elaine aren’t being protected behind the scenes

Shes not actively listening to a BLACK WOMAN explaining why her reaction is so subvert and why Piers is an overt racist. She made up her mind. When she says “educate me” she means “Tell me what I want to hear.”

Actually, I think that’s exactly right and I do agree with it. You might not think you’re racist, but who are you to deny someone else of race’s experience from your privileged white position when they’re saying how your acting is implicitly racist? You might not want to hear it but surely they’re more qualified to talk about it than you are?

Listen to what people are saying and educate yourself and don’t cry about it when you don’t hear what you want to hear and/or are told that your behaviour is actively making the situation worse. Listen.

Sorry if this was too woke for some of you, but displays like Osbourne’s really aren’t helping the situation. I respect that the way cancel culture may have come for her regarding her tweet isn’t useful either, but the way that she’s dealt with the situation with Underwood – who remained calm and tried to explain things coherently to her here – is a classic case of not being too stubborn to accept that anything but your own truth is correct and doubling down on that when you’re called out about it. We need to be better.

For more of the same, check out when Sharon Osbourne said she wanted to give Prince Charles a blow job. Is that a cool thing to be saying?